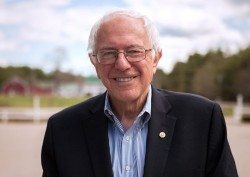 As it has been written many times now, Bernie Sanders has become the mainstream candidate of many cannabis law reform advocates, especially following his comments about the Drug War ruining lives and the failure of the War on Drugs; his announcing a bill to abolish private prisons; and his openness to legalizing marijuana at the federal level. Many libertarians and conservatives in the Drug War reform movement favor Rand Paul, of course, and while I’ve been an unabashed fan of Sanders for a while, I hope that Paul’s polling numbers rise, but I’m afraid that he’s lost the GOP anti-establishment vote to Donald Trump.

Hillary Clinton is still the odds-on favorite, but her campaign has to be worried about the rise of Sanders and the potential entrance of Joe Biden. Iowa cannabis law reformers need to put all candidates, Democrats and Republicans on-record early and often about their position on marijuana and the greater Drug War. An Iowa mother desperate for federal medical marijuana legalization spoke with Ms. Clinton at the Iowa State Fair and Clinton aides took her info, so I hope that the Democratic frontrunner moves the right way on cannabis law reform.

From NBC News, who notes that Iowa caucus goers seem to be in a growing anti-establishment mood:

Vermont Sen. Bernie Sanders and businessman Donald Trump — the two biggest anti-establishment candidates in the Democratic and Republican presidential primary fields, respectively — have seen their support surge, according to a new survey of voters likely to participate in the Iowa caucuses.

In the Des Moines Register/Bloomberg Politics poll, Sanders is now polling just seven points behind Democratic front runner Hillary Clinton, nearly doubling his share of the vote since the last survey was conducted in May.

The conventional wisdom has been that Bernie Sanders doesn’t stand a chance against the Clinton Machine and could never win, but the momentum we are seeing in the polls has got to change a few minds. Secretary Clinton enjoyed many of the same advantages that she has now against first-term Senator Barack Hussein Obama and we know how that played out. Clinton was leading in the polls in Iowa, but an Iowa surprise victory launched Obama into legitimate contender status, even after he lost New Hampshire. Sanders has the opportunity to win both Iowa and New Hampshire, likely putting to bed the notion that he can’t win and Americans love winners, so a Bernie sweep of the first two states should change the political narrative if it hasn’t already.

While Sanders doesn’t have the charisma and oratory skills of President Obama, his supporters are passionate and he has a long history of being on the right side of history, from the Vietnam War to the Drug War to the Iraq War. Marijuana legalization, the War on Drugs, the prison-industrial complex and racial justice will continue to be big issues during the Democratic nomination process and Sanders is in the best position to match the ideals of primary and caucus goers. No Democratic candidate has actually won both the Iowa caucus and New Hampshire primary outright and then gone on to lose the nomination. For cannabis law reform advocates that support the Vermont Senator, it is imperative that we do all that we can to help all voters, but particularly Iowa caucus voters, #FeelTheBern.