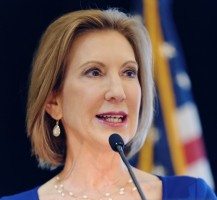 “I very much hope that I am the only person on this stage who can say this, but I know there are millions of Americans who will say the same thing. My husband Frank and I buried a child to drug addiction. We must invest more in the treatment of drugs.

“We are misleading young people when we tell them marijuana is just like having beer. It’s not. And the marijuana they’re smoking today is not the same marijuana that Jeb Bush smoked 40 years ago. We need to tell young people the truth. Drug addiction is an epidemic and it is taking too many of our young people. I know this sadly from personal experience.”

It is terribly sad when a parent loses a child for any reason, much less the preventable tragedy of drug overdose, Ms. Fiorina.

But marijuana did not kill your step-daughter. According to the account in your book, Lori Fiorina struggled with alcohol and prescription pills, as well as the eating disorder bulimia.

You are misleading young people, ma’am, when you equate your step-daughter’s death from highly addictive substances and mental illness to an herb that is incapable of producing fatal overdose, even in the tiny minority of its consumers who develop psychological dependence on it.

Yes, let’s tell the young people the truth: it is misleading to tell them marijuana is just like having a beer, because it is far less dangerous than that. Objectively, Ms. Fiorina, in every measure, marijuana is safer than alcohol. You cannot continue to peddle this reefer madness hysteria in the age of Google and expect to maintain credibility with young people.

Jeb Bush was a privileged rich white boy; I’m fairly certain he wouldn’t have been smoking low potency ditch-weed back in the 1970s. Ms. Fiorina, people like you who make this potency claim pretend as if potent hashish hasn’t existed for centuries.

Nevertheless, through selective breeding techniques, marijuana growers have doubled to tripled the average potency of cannabis over the past four decades. Jeb Bush probably smoked weaker pot. What you don’t understand, Ms. Fiorina, is that potency doesn’t make pot into a different, more dangerous drug. You can get impaired on beer, wine, or liquor, too – the difference is in how much it takes.

Marijuana, when smoked, has a distinct advantage over alcohol. Marijuana smoke is metabolized almost instantaneously by the lungs. Alcohol has to make a trip through the stomach, taking some time to metabolize. That’s why, Ms. Fiorina, we have this phenomenon called “one beer too many”, where you haven’t yet felt the effects of the first beers, drink some more beers, then realize you’re far more impaired than you intended to be.

But with marijuana, you smoke it to get high. Jeb Bush probably took a puff, felt a little high, maybe another, felt more high, and puffed through the whole joint before he got high high. Today, Ms. Fiorina, Jeb might only have to smoke three puffs to get high high. And that means less harmful smoke in the lungs, so today’s potent marijuana is something of a harm reduction measure.

You wouldn’t down a 12-ounce glass of tequila the way you down a 12-ounce beer. Neither do responsible cannabis smokers power-puff their way through one or two whole joints like they did in the 1970s. It’s a waste of a pricey commodity to do so.

Drug addiction is an epidemic, Ms. Fiorina, but it isn’t marijuana that contributes to that. In fact, there’s a good case to be made that marijuana prohibition and drug testing has incentivized the use of prescription pills and alcohol, since those substances flush from one’s system far more quickly than marijuana’s THC does. Certainly, the recent epidemic of synthetic cannabinoids owes to those factors – people use “Spice” & “K2” because they’re pseudo-legally available and their metabolites don’t trip workplace and academic drug screens.

Furthermore, Ms. Fiorina, numerous reports and surveys of medical marijuana patients show that they are able to reduce or eliminate their need for prescription opioid painkillers, like Oxycontin, that are so dangerous and highly addictive, as well as marijuana being a substitute treatment for alcoholism?

Did you know, Ms. Fiorina, that the DEA has allowed for a massive increase in production of oxycodone over the medical marijuana era, claiming they had to produce an excess of pills so there’d be enough for both illegal addicts and legal patients?

Did you know, Ms. Fiorina, that one of the main factors driving the recent heroin epidemic has been people whose Oxycontin prescriptions have lapsed, leaving them to choose a $5 bag of heroin from the street over the cost and hassle of more Oxycontin?

Respectfully, as a step-parent who lost a daughter to hard drugs (alcohol’s a hard drug, ma’am), it is ironic you’d advocate for the prohibition of marijuana that only exacerbates the problems of drug addiction.