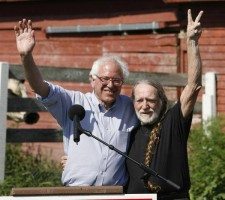 Bernie Sanders’ presidential campaign is already a unique endeavor that will hopefully allow our nation to more honestly debate a whole host of issues, particularly on the Democratic side. Sanders will definitely push Hillary Clinton on many progressive issues and the Republicans likely will have to deal with the consequences of the liberal vs. centrist tussle after the Democrats have their say.

Sanders, a self-described democratic socialist, is already such a unique candidate in that he appears to be completely honest. Most elected officials usually try to channel charm and optimism, especially when running for president, but the independent senator from Vermont isn’t afraid to gruffly tell it how he sees it. Many folks concerned about the next president’s impact upon the four states that have already legalized marijuana, the legalization policy in our nation’s capital, the several states likely to legalize in the near future and the more than 20 states that have legalized medical marijuana, could certainly do worse than Mr. Bernie Sanders.

Hailing from a medical marijuana state, admitting to using cannabis in his younger years and understanding where his base lands on this issue, we can certainly expect Bernie Sanders to be one of the most progressive candidates on cannabis in the race. From the Bustle’s Kim Lyons:

The issue of marijuana legalization will likely be front and center for presidential candidates in 2016, and with fewer and fewer states barring all marijuana use, it makes the possibility of a national law more likely. Many believe Vermont could be the next state to decriminalize marijuana use, according to The Huffington Post. The home state of newly-declared presidential candidate Bernie Sanders already allows marijuana for medical use, and has reduced possession of small amount of pot to a civil infraction, barely on the same level as a parking ticket.

In an interview with Time magazine last year, Sanders said he supported medical marijuana use, and admitted to smoking pot when he was younger. He expressed some concerns about legalizing pot for recreational users, but is on board with medical uses. The war on drugs, Sanders told Time, has put a lot of non-violent offenders in jail, while not focusing enough resources on the epidemic of heroin use and other such dangerous drugs.

However, in the same Time magazine interview, Sanders said he did not see marijuana decriminalization as a “one of the major issues facing our country.” It is no doubt a controversial issue for many still, and Hillary Clinton has yet to make her position clear. She told CNN in 2014 she wanted to examine how effective state laws were before she decided what action, if any, should be taken at the federal level. The Republican candidates who have announced they will seek their party’s nomination have mixed opinions on decriminalizing marijuana. Rand Paul has said he supports decriminalization, and wants to see medical marijuana restrictions relaxed, and Ted Cruz admitted to toking up as a teenager.

Senator Sanders will likely be very cautious on marijuana policy, especially at first. He certainly won’t be a neanderthal on the issue like Chris Christie or afraid to really speak his mind like Hillary Clinton. He will likely stake out a position similar to Rand Paul, declaring that the federal government shouldn’t be wasting resources trampling the will of the voters who have decided to end cannabis prohibition within their borders or allow medical marijuana to qualified patients.

Senator Sanders would be wise, in my opinion, to stake out a very aggressive campaign linking our nation’s War on Marijuana to the many other examples of inequality and injustice in this nation. This could be a great issue during the Democratic primary and will place him with the majority of Americans that want to treat marijuana like beer and wine. And besides, he has already been outed as a pot-smoking socialist by the President of the United States, so he might as well continue speaking the truth and declare loud and clear that the Drug War has failed and that it is time for America to lead the way past the harmful consequences of prohibition. Will Bernie Sanders become the cannabis candidate? We shall see, but he certainly should.