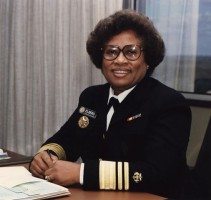 “I certainly would support” it, Dr. Elders told Marijuana Politics on Saturday. “You know, we don’t have cigarettes [in the Controlled Substances Act]. We don’t have alcohol on it,” she added, “So I think that marijuana should be removed and studied and looked at.” Dr. Joycelyn Elders was in San Francisco for the International Cannabis Business Conference where she delivered a keynote address on marijuana reform.

Vermont Senator and presidential candidate Bernie Sanders made waves last summer when he expressed support for marijuana reform. In November, Sanders followed through, introducing a bill to end the federal ban on marijuana by descheduling it from the Controlled Substances Act.

Any serious criminal justice reform must include removing marijuana from the Controlled Substances Act. #DemForum

While Sanders is not the only presidential hopeful advocating for marijuana reforms, he has gone further on this issue than any other candidate from the two major parties. Former Secretary of State Hillary Clinton has been more cautious, calling instead for rescheduling marijuana to Schedule II, the same drug category as cocaine and methamphetamine. On the Republican side, Kentucky Senator Rand Paul has earned praise from drug policy reformers for introducing a bill to legalize marijuana for medical purposes.

Classifying marijuana in the same category as cocaine ignores the major issue.https://t.co/mgmHtbXhtz

Former Surgeon General Elders’s comments serve as a much-needed boost to the Sanders proposal. While most Americans believe marijuana should be legal, Bernie Sanders’s legislation still has zero co-sponsors in the Senate.

A pediatrician, Dr. Elders served as Surgeon General in the Clinton administration. In 1993, she opined that drug legalization should be studied as a possible way to reduce crime, which drew criticism from the White House as well as tough-on-crime politicians more broadly. “I felt like the government should be involved in studying it, and, if necessary, legalizing it,” she said, “so that it could be taxed and the funds used to make a real difference.”

Because of these positions, Dr. Joycelyn Elders was forced to resign as Surgeon General. Since retiring from public service, Dr. Elders teaches pediatrics at the University of Arkansas for Medical Sciences and speaks for the causes of drug policy reform and comprehensive sex education.

My full interview with Dr. Elders at the ICBC in San Francisco where she discusses her position on the Drug War, including backing Bernie Sanders’ plan to end cannabis prohibition (starting at 5:32):