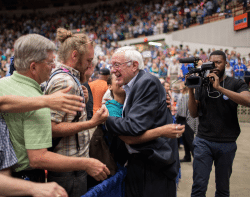 Bernie Sanders has certainly captured the hearts of progressives in the Democratic Party and many of those that have been fed up with politics as usual. Many in the cannabis law reform community have rallied around the Vermont Senator, prompting the establishment of the Facebook group Cannabis Advocates for Bernie since he was the first mainstream candidate to state that he or she will consider legalizing marijuana if elected President of the United States. Sanders garnered huge crowds on his West Coast swing through cannabis-friendly locales all the while, some political pundits try to downplay Sanders’ campaign, waiting for his support to peak as the conventional wisdom is that he won’t appeal to any constituency beyond his liberal base. It should now be obvious that Bernie Sanders’ momentum continues, as he surges past Hillary Clinton in New Hampshire poll released by Franklin Pierce University/Boston Herald; Sanders is currently supported by 44% of likely Granite State primary voters while Clinton sits at 37%.

To put the poll in perspective, I checked back to the Franklin Pierce polling in the 2008 Democratic election. A poll conducted by Franklin Pierce that finished up on September 14, 2007, 116 days before the 2008 New Hampshire Primary, had Hillary Clinton doubling Barack Obama , 36% to 18%; Clinton’s percentage of the vote ended up at 39% in New Hampshire while Obama came in second with 36%.  These latest poll numbers, especially in consideration with the history of the 2008 election, should have the Clinton machine worried and Sanders’ supporters excited that the long-shot candidate, may just not be that big of a long-shot anymore.

Mark Halperin, managing editor of Bloomberg Politics, stated that he wasn’t surprised by the Sanders surge in the polls on MSNBC’s Morning Joe:

The Bernie Sanders campaign had this to say about the poll in an email to supporters:

A new poll came out this morning, and I wanted to make sure you saw it right away.

This is the first poll that shows us in the lead, but it won’t be the last. Last weekend over 65,000 people showed up to see Bernie in Los Angeles, Portland, and Seattle, and supporters recently hosted over 3,500 organizing meetings attended by over 100,000 people.

These poll numbers should energize Cannabis Advocates for Bernie and everyone that supports Sanders. Cannabis Advocates for Bernie have secured a booth at the Seattle Hempfest this weekend, an event that brings in more than 100,000 cannabis and hemp activists from around the country. This will be a great opportunity to learn more about Sanders and figure out how you can help the best candidate for cannabis law reform win his party’s nomination and the presidency. Now, every time I post a Bernie blog, I get comments from Rand Paul supporters, and I do hope that Paul wins the Republican primary, but the libertarian conservative is shrinking in the polls as Donald Trump has galvanized the support of the anti-GOP establishment voting bloc that Paul needed to be successful. Hope to see many of the cannabis community that support Sanders at Hempfest this weekend as we #BernBabyBern or #FeelTheBern or #BernDownTheHouse, #BernDownForWhat whatever the kids are hashtagging these days.