The Past, Present and Future of Vaping Marijuana 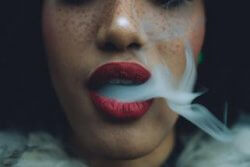 When most people imagine marijuana, they imagine a joint or blunt, or else a well-packed bowl. However, cannabis culture has been expanding beyond basic bud for decades now, and the popularity of vaping cannabinoids, especially THC, has become a popular practice. Though the exact number of marijuana vapers is difficult to calculate, recreational and medicinal dispensaries estimate that about 30 percent of their business consists of vaping products.

Yet, the recent epidemic of vaping-related illnesses seems to have turned the vaping industry on its head, and THC vaping products are especially under fire. Some research indicates that vaping marijuana can be dangerous — but it is worth exploring the history of cannabis and vaping to better understand the current situation and how THC vapes could function in the future.

Though vaping has only become popular within the recent decade, the truth is that vaping has been around for almost 100 years. In 1927, as concerns about smoking rose, Joseph Robinson patented an “electric vaporizer,” which he believed would make it easier to inhale medicinal vapors. Throughout the latter half of the 20th century, many other inventors experimented with “smokeless” and “electric” cigarettes, but the tools were too clunky, too expensive or otherwise too ahead of their time to catch on.

Perhaps the biggest early innovation in vape tech was tabletop vaporizers, also called Volcanos, which produced a plume of water vapor captured in a plastic bag, from which smokers inhaled — but unlike the other vaping tools of this era, Volcanos were not designed for tobacco. For marijuana users, vaping was a godsend; it allowed people to partake without producing the same noxious cloud of weed skunk, and similar to tobacco cigarettes, joints and pipes were seen as dirty and potentially harmful to smokers’ lungs. Conversely, vaporizers allowed users to enjoy THC through (seemingly) cleaner and safer water vapor.

However, both the Volcano and handheld vaporizers of this time differ fundamentally from vapes of today in how they imbued water vapor with the active compound of THC. Back then, vaporizers super-heated marijuana flower until the THC burned off in water vapor. As vaporizer technology advanced, so did procedures for procuring concentrated cannabinoids like THC and CBD. As a result, most vapes began to rely on cannabis oils — which is where we find ourselves today.

Essentially all vapes on the market today make use of cannabis oils, which are heated and delivered through water vapor. Extracting cannabis oils is an extensive process that should not be performed by the average user. There are two different extraction methods in use today: One relies on ethanol or butane and one on pressurized carbon dioxide.

Even as research on nicotine e-cigarettes increases, revealing that vapes can in fact be safer than traditional tobacco cigarettes, research on marijuana vapes is virtually non-existent. Cannabis remains a Schedule 1 drug under federal law, so it is incredibly difficult for laboratories to receive permission to study any cannabis products, and funding can be difficult to acquire, as well.

Worse, there remains a thriving black market for marijuana goods, especially in regions where weed remains thoroughly illegal. It should go without saying that the black market is the worst place to obtain any substance but especially something that can immediately and continuously affect one’s health, like vape oil. Some rudimentary tests on these oils have found them to contain exceedingly toxic substances, like lead, formaldehyde and arsenic. Because so many of the sufferers from the mysterious vaping illness attested to using illicit products, it is likely that both anti-marijuana laws and lack of regulation are a cause for concern.

Fortunately, the future looks much brighter. As more states legalize medicinal and recreational marijuana, access to cannabis products for research is improving. Plus, a market is developing for trustworthy and meticulous cannabis farmers and manufacturers. Weed users can already find reliable brands available from online and local dispensaries; brands like Trulieve are reputed for offering high-quality flower, oils and more. As long as retailers and users research brands before buying, they should be able to avoid shoddy vape tools.

It is impossible to predict the future, but the likelihood of improved standards and regulations for the marijuana industry as a whole is great. Vaping isn’t new, but it is more popular than ever. As long as we work together to prioritize the quality of vape goods, we should see the rise of vaping as a positive development to cannabis culture.