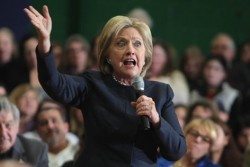 Hillary Clinton’s record on the War on Drugs sets her apart from other the other candidates – and not in a good way. From her criminal justice agenda as First Lady to her foreign policies as Secretary of State, Hillary Clinton has proven herself to be one of the greatest drug warriors of our generation. At a time when two-thirds of Americans support ending the War on Drugs, it’s crucial for her record on the issue to be brought to light.

Over the course of Bill Clinton’s presidency, Hillary Clinton publicly supported tough-on-crime criminal justice reforms that escalated and emboldened the War on Drugs.

As First Lady, Hillary Clinton pushed for the largest crime bill in the history of the United States: the Violent Crime Control and Law Enforcement Act. This 1994 crime bill called for 100,000 more police officers, provided billions of dollars of funding to prison construction, and ramped up the use of mandatory minimum sentences. This law became a signature accomplishment of Bill Clinton’s presidency.

Under this law, drug users were more easily incarcerated and more likely to serve long sentences – which fueled even more draconian patterns of mass incarceration. By the time the Clintons had left the White House in 2001, the number of Americans in prison had increased nearly 60 percent.

Their contribution to mass incarceration rivaled that of the greatest drug warriors.

According to Michelle Alexander, author of The New Jim Crow, “Clinton escalated the drug war beyond what conservatives had imagined possible a decade earlier.” As Donna Murch points out in The New Republic, “the total numbers of state and federal inmates grew more rapidly under Bill Clinton than under any other president, including the notorious Republican drug warriors Richard Nixon, Ronald Reagan, and George H. W. Bush.”

Hillary Clinton’s involvement with the War on Drugs didn’t stop there.

As Secretary of State, Clinton waged the War on Drugs abroad. Under Hillary Clinton’s leadership, the State Department fueled the Mexican Drug War by funding efforts to combat drug trafficking. Through its Mérida Initiative, Clinton’s State Department hired American defense contractors to take part in the conflict and sold billions worth of weapons to Mexico – leading it to become one of the world’s top purchasers of U.S. military arms and equipment.

Over the course of Hillary Clinton’s tenure as Secretary of State, the Mexican Drug War spiraled into chaos, killing over 160,000 people and displacing millions of others.

Now aiming for the presidency, in the Democratic race against Bernie Sanders, Hillary Clinton describes herself as a progressive leader who will end mass incarceration. As she campaigns for the Democratic nomination, Clinton appears to have “evolved” on issues of drug policy, and gives lip-service to some of the things drug policy reformers have been saying for years. In a January debate, for instance, she stressed the importance of treating addiction as a health issue rather than a crime, hinting at an understanding of the failures of the drug war.

While Hillary Clinton is willing to speak vaguely against the War on Drugs, she refuses to embrace meaningful reforms to current drug policies. While most Americans agree that marijuana should be legal, Clinton supports rescheduling it to Schedule II, the same category as cocaine and methamphetamine. This proposal would do little to end the War on Drugs, but would facilitate research on medical marijuana and allow pharmaceutical companies to sell cannabinoid drugs.

Hillary Clinton’s drug policies are completely in line with those of the wealthy special interests that fund her campaign, like the private prison lobby and Big Pharma. Under Clinton’s marijuana policy, users would still be prosecuted for mere possession (as is the case for cocaine and methamphetamine users), but drug companies would get a free pass to profit off of marijuana’s medicinal value.

This position on marijuana policy is certainly not enough to redeem Clinton’s record of tough-on-crime legislation and drug warmongering abroad. Though she didn’t declare it, Hillary Clinton has been a champion of the War on Drugs. Her policies have sacrificed millions of lives to the failed ideal of a drug-free America and her contribution to mass incarceration haunts this nation to this day.

Viewed as a whole, Hillary Clinton’s record reveals her to be a staunch drug warrior – and if she won’t push for meaningful reforms now, it’s unlikely she’ll ever get around to it.