Bernie Sanders in Seattle: “Too Many Lives Have Been Destroyed by the War on Drugs.” 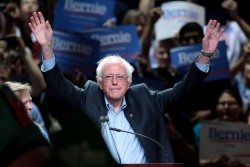 Vermont Senator Bernie Sanders had an eventful little Saturday in Seattle to say the least. In a much-publicized encounter a couple of apparent Black Lives Matter protestors took over the stage at an afternoon anniversary celebration of Medicare and Social Security, decrying Seattle as a racist city and demanding a moment of silence to commemorate the death of Michael Brown (a four-and-a-half minute moment of silence, to be exact, to symbolize the amount of time that Brown laid on the streets of Ferguson before anyone tended to him). A majority of the crowd didn’t appreciate the disruption of Sanders’ speech and the activists didn’t relent the mic to him. Sanders ended up leaving without addressing the crowd.

The altercation has been the subject of much debate among progressive activist circles as many are wondering why a progressive champion, who marched in the Civil Rights movement, has been subjected to Black Lives Matter protests when other candidates seem like more appropriate targets. The ordeal has even split Black Lives Matter supporters and advocates. I understand the passion of the Black Lives Matter movement and I share the frustration of advocates that haven’t seen the necessary reforms or enough politicians care about the issue. However, I sincerely believe that Bernie Sanders is the wrong target as he has the best policies to address the plight of the poor and people of color. I do hope that the protest helps bring the issues to the forefront of Sanders’ campaign and political discourse in general.

Following the Medicare and Social Security event, Sanders spoke in front of a packed crowd in Seattle, with a 12,000 maximum capacity audience at the Hec Edmunson Pavillion, where the Washington Huskies play basketball. In addition to the capacity crowd inside the arena, an estimated 3,000 people or so outside the pavilion. In a sign that Sanders understands the importance of the Black Lives Matter movement in the Democratic primary, the anti-establishment Democratic candidate briefly referenced the altercation and told the Seattle crowd that, “on criminal justice reform and the need to fight racism there is no other candidate for president who will fight harder than me.”

Some of his biggest applause lines came when he declared that college education should be tuition free and that the United States should move to a single-payer, “Medicare for all” health-care system.

Saturday night’s rally was the latest around the country where Sanders has filled arenas and convention halls. By contrast, Clinton’s largest crowd, which her campaign estimated at 5,500, came at her formal kickoff in June in New York.

Quite the reception for Sanders in Seattle. pic.twitter.com/dibVAOGd5x

Bernie Sanders continues his West Coast tour and I expected that he would touch on the Drug War, since he was speaking in states that have legalized sales of marijuana (recreational in Seattle and Portland; medical in Los Angeles). Based upon his record and his willingness to discuss the War on Drugs and the fact that he is willing to consider the legalization of cannabis if elected President of the United States, I consider Sanders the best mainstream candidate on marijuana policy, Drug War reform and civil liberties in general (with Rand Paul second). In due time, I, and other drug law reform advocates will want to hear specifics, just as the #BlackLivesMatter activists want to see specific political solutions. The democratic socialist hasn’t ran from controversial political stances in the past, so I expect we will see specifics soon. Stay tuned to Marijuana Politics as we update all presidential politics impacting the cannabis community, including Sanders’ speech in Portland that is expected to match, if not surpass the crowd in Seattle.

Update: Sanders reiterated his commitment to criminal justice reform before a 28,000 supporters in Portland, his largest rally to date.