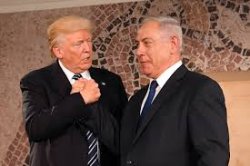 Israel has long been a leader in medical cannabis research and now stands poised to serve a huge export market. Yet this market will remain unserved and global medical cannabis production discouraged, as Prime Minister Netanyahu has caved to pressure from Donald Trump to quash a lucrative and health-promoting trade. As reported by The Jewish Telegraph Agency,

The prime minister made it clear that he did not want Israel to be a pioneer in the export of medical marijuana in order not to anger the U.S. president, according to the report.

While commonly ignoring any American request to stop building settlements on Palestine land, in this case, the Israeli Prime Minister was quick to comply.

Netanyahu told the heads of the ministries he ordered the freeze after receiving a call about the issue of exporting marijuana from Trump, who is against its legalization.

Perhaps the most troubling aspect of this development is Trump’s apparent active opposition to medical cannabis. Of course, Attorney General Jeff Sessions nourishes a great hatred for all things marijuana and the others in Trump’s cabinet are extreme in opposition to cannabis, the President himself has said little about the plant. During his campaign, Trump expressed support for medical marijuana and for the rights of states to choose. His comments about the drug war have been extreme, even praising the homicidal actions of foreign leaders, but has so far not demonized cannabis.

How did the notion come into Trump’s mind to request that Netanyahu stifle shipments of medical cannabis? It seems unlikely that he came up with the idea himself.

The fact that Trump apparently personally made a phone “call about the issue” would seem to indicate its importance to the President. Unfortunately. In any case, Trump’s actions, far more than any that have come before, show him to be actively opposed to cannabis, its medical uses, and its value to commerce.