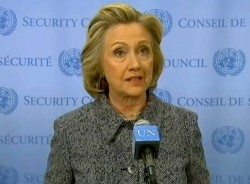 As most Americans have come to realize, the War on Drugs has been a phenomenal disaster. Triggering the arrest of millions of otherwise law-abiding Americans, it has contributed to an unprecedented pattern of mass incarceration, one which unfairly targets the poor and people of color. Despite its success in locking up drug offenders en masse, the War on Drugs has failed to reduce either drug use or the harms of drugs, amounting to one of the greatest policy failures of the past century.

More than ever, Americans need a leader with the political courage to put an end to the drug war.

Hillary Clinton seems reluctant to take on this fight as president. She’s stayed mostly silent on the failures of our current drug policies during the course of her presidential campaign. Clinton has been historically opposed to marijuana decriminalization, and while voters have confronted her multiple times on the issue of marijuana, she has yet to clarify her current stance on drug policy.

While Hillary Clinton may not speak openly about her stance on the War on Drugs, her record on criminal justice issues reveals her as a staunch proponent of tough-on-crime legislation. In the 1990s, she favored punitive sentences to deter people from violating the law, including “Three Strikes” measures that proved not only disastrous but unconstitutional as well:

Hillary Clinton has a complicated history with incarceration. As first lady, she championed efforts to get tough on crime. “We need more police, we need more and tougher prison sentences for repeat offenders,” Clinton said in 1994. “The ‘three strikes and you’re out’ for violent offenders has to be part of the plan. We need more prisons to keep violent offenders for as long as it takes to keep them off the streets,” she added.

More revealing still is how Hillary Clinton is funding her campaign. As reported in July by The Intercept, the Washington insiders collecting cash for Hillary Clinton are the same that lobby politicians on behalf of the prison industry:

This Clinton-prison connection represents a dangerous conflict of interest that should worry drug law reform advocates. When you compare Clinton’s financial ties to the prison-industrial complex with Bernie Sanders’ call to abolish private prisons, it is no wonder why marijuana law reform advocates and Drug War reformers have largely flocked to Sanders’ campaign.

It’s not uncommon for American politicians to accept campaign donations from big corporations to get themselves into office, but special interests rarely invest in candidates that don’t favor their bottom line. In other words, considering where her campaign’s funding comes from, it’s likely that a Clinton presidency would perpetuate mass incarceration, if not escalate it.