Bernie Sanders on Facebook: There Is No Question That the War on Drugs Has Been a Failure 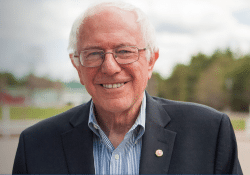 Back on May 3rd, I asked, “Will Bernie Sanders Become the Cannabis Candidate?” As regular readers of Marijuana Politics can certainly tell, we are big fans of the Vermont Senator and mainstream presidential candidate, praising his position on cannabis issues and the greater Drug War in post after post. Media outlets are now reporting that cannabis advocates across the nation have hopped on the #FeelTheBern bandwagon. In addition to his stance on the failed Drug War, we are also drawn to the fact that Sanders has been on the right side of major issues, going all the way back to the Civil Rights Movement and the Vietnam War to George W. Bush’s Iraq War.

Drug law reform activists hoped that Sanders would support sensible federal marijuana policies and help end harmful Drug War policies that disproportionately hurt people of color and people battling poverty. These issues aren’t just good policies that help correct decades of injustice, they are also good politics during the Democratic primary. While Sanders hadn’t necessarily been one of the most vocal Drug War reformers, he had been on record against the failed War on Drugs decades ago and Vermont has been one of the better states on cannabis policies, particularly among those without the initiative process, where statewide reforms must come from the state legislature, not put on the ballot be advocates.

It appears that Bernie Sanders and his campaign advisors have realized the utility of Drug War reform, particularly following the #BlackLivesMatter protest that interrupted one of his appearances in Seattle. The Drug War has undoubtedly devastated black communities; so much so that Professor Michelle Alexander wrote the influential best-seller: The New Jim Crow. Senator Sanders has since made Drug War reform and the abolishment of private prisons staples of his campaign.

Social media has been a huge foundational element of the Bernie Sanders presidential campaign as supporters have been able to take the debate to their own friends and family members because the mainstream media and Democratic establishment have tried to discount the campaign from the start. The inevitability of Hillary Clinton has been the conventional wisdom among political pundits and the media elite, but that notion is starting to crack just a bit as Clinton hasn’t been able to dodge questions about wiping her email server clean and Sanders continues to surge in the polls. The “unelectable” tag that some have tried to pin to Sanders, certainly seems to have faded a bit, especially now that Donald Trump has become the Republican frontrunner and polls show that Sanders does just as well, if not better, than Clinton against Republican challengers.

When I saw on my Facebook feed a picture of Bernie Sanders with the statement, “There Is No Question That the War on Drugs Is a Failure,” I assumed that it was a meme created by supporters. I was ecstatic to see that the picture was posted by the official U.S. Senator Bernie Sanders Facebook page. It is easy to predict that Drug War reform and marijuana legalization will be much bigger issues during the Democratic primary, than on the Republican side, and I think that bodes well for the challenger from Vermont. 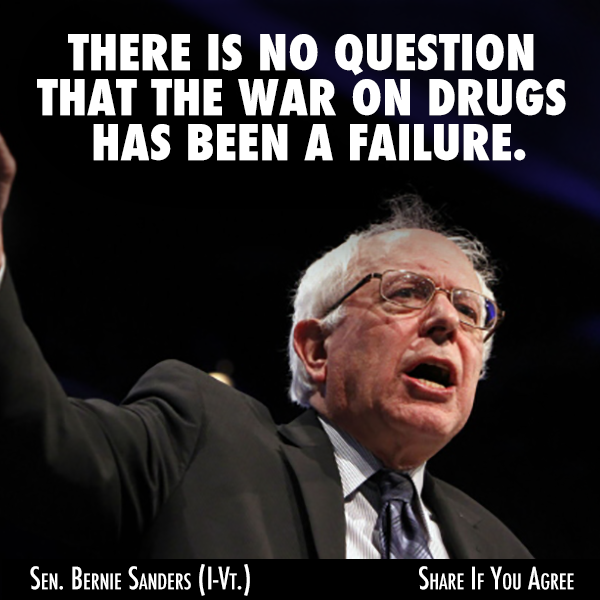