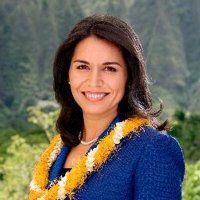 Tulsi Gabbard legislates for Hawaii’s 2nd District in the House of Representatives. In Congress, she has proven to be an outspoken supporter of cannabis rights on all fronts and introduced a current proposal to completely deschedule marijuana. She will be speaking at the upcoming International Cannabis Business Conference in Kauai, December 2017.

Tutsi has written thoughtfully on the issue. Her November 2017 statement, Tulsi Gabbard on Ending Federal Marijuana Prohibition, should be required reading by all politicians. She makes great sense, mentioning the Schedule I stifling of research, dangerous cash practices with current banking restrictions, and the disastrous War on Drugs damages to the lives of tens of millions of Americans. She states,

Whether an individual chooses to use marijuana or not should be treated the same as whether they choose to use alcohol or tobacco.

The higher the elected office Tulsi attains, the better off America will be. She is an attractive candidate with her progressive views and veteran’s perspective. She served honorably in the Army National Guard, including a tour of duty in Iraq. She has strong and thoughtful opinions and actions to many of the country’s and planet’s key problems. Many of us would like to see her as President.

Hear Representative Tulsi Gabbard in Kauai December 1-3 at the ICBC conference. Support her political career at this link.