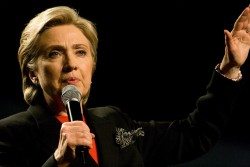 As her lead in the polls continues to dwindle, Hillary Clinton is trying her best to appeal to young voters, who favor her main opponent, Vermont Senator Bernie Sanders. Clinton goes to ridiculous lengths in her attempts to woo young people into supporting her campaign: she’s whipped and nae-naed on Ellen, dubbed herself Chillary Clinton, and even asked college students to describe how they felt about their student debt “in three emojis or less.”

Although it seems that she’ll do anything to get their votes, there’s one thing Hillary Clinton won’t do: champion the issues that young voters care about.

While 77% of young Democrats believe marijuana should be legal, Hillary Clinton is unwilling to support meaningful marijuana reforms. She’s opposed decriminalizing marijuana during her previous presidential run and has given little indication that she changed her position on the issue since. Today, Clinton will only go so far as to support the rescheduling of marijuana to Schedule II, giving it the same legal status as cocaine and methamphetamine.

It’s unlikely that Clinton’s reluctance to embrace marijuana law reform will help her gain popularity among young voters. But her positions on this issue are certainly in line with the interests of a key ally of hers: Big Pharma.

Despite naming the pharmaceutical industry as one of her greatest “enemies,” Hillary Clinton has received more money from drug companies than any other candidate this cycle. Pharmaceutical manufacturers donated more than $340,000 for her 2008 presidential bid – and in just the first six months of her 2016 campaign, Clinton has received over $160,000 from drug companies. To top it off, Big Pharma giants Pfizer and Proctor & Gamble each have donated between $1 million and $5 million to the Clinton Foundation. And that’s likely just the tip of the iceberg, as Clinton enjoys the support of numerous Super PACs whose finances are notoriously obscure.

Big Pharma has a lot to lose from marijuana reform. The medical properties of marijuana make it a direct competitor with some of their best-selling drugs, namely opioid painkillers like Vicodin and Oxycontin. Recent research suggests that marijuana allows patients to treat their pain with lower doses of opioids and that providing access to marijuana reduces the prevalence of opioid use. Additionally, marijuana cannot be patented, making it difficult for drug companies to profit off its sale.

In other words, pharmaceutical companies cannot get rich off of marijuana – but marijuana could severely impact Big Pharma’s profits.

With Hillary Clinton in their pocket, pharmaceutical companies expect their candidate to protect their bottom line – and that’s exactly what she’s is doing. There’s no doubt that Clinton wants to earn the support of young voters, but she’s unwilling to do that at the expense of her long-standing alliance with the pharmaceutical industry. Hillary Clinton can dab all she wants, but on marijuana, she’s sided with Big Pharma, not with the young voters she wants to seduce.