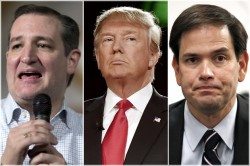 The Republican presidential primary looks to be boiled down to three real candidates following the Iowa caucus and one, Marco Rubio, should have cannabis law reformers and civil libertarians concerned. The Reefer Madness candidate was Chris Christie, who famously stated that marijuana users were diseased and needed curing with law enforcement (and we had some fun at Christie’s expense here at Marijuana Politics), but he’s likely to fade away after New Hampshire. Senator Rubio, however, has echoed Christie’s prohibitionist policies and has emerged as the GOP establishment candidate.

You never want to take too much away from just one election, particularly a low-turnout caucus that doesn’t reflect the demographics of the rest of the country, but reading the political tea leaves, it isn’t hard to see that the top three finishers, Ted Cruz, Donald Trump and Marco Rubio look to be the three GOP frontrunners. Of course, the Democrats are officially down to two, Bernie Sanders and Hillary Clinton, as Martin O’Malley has exited the race.

Donald Trump will continue to poll well, in the short-term at least, as his name recognition, anti-establishment message and media attention should keep a significant portion of his voters clinging to him (he could shoot somebody and still keep his support, don’t ya know). Ted Cruz has captured the evangelical Christian base and with Mike Huckabee out of the race, and once Ben Carson exits the race, Cruz will capture more conservative Christian support. The establishment backers and donors, of candidates from Jeb Bush to Chris Christie will likely see Rubio as an acceptable candidate. The one wild card that could get the backing of the establishment, with a strong showing in New Hampshire, is John Kasich, another candidate the cannabis community should fear.

Of the GOP’s three-headed monster, Donald Trump  (as much as it pains me to give him any kind of credit) seems to be the best on marijuana policy. Before he flip-flopped on most social issues to run as a Republican, The Donald, was a social liberal that even supported the legalization of all drugs. Now that a GOP presidential frontrunner, he supports medical cannabis and while he personally opposes full legalization, appears to support a states’ rights position on the issue.

Ted Cruz, on the other hand, as my fellow Marijuana Politics blogger Romain Bonilla pointed out previously, flip-flopped the opposite way on marijuana and “evolved” on the issue, remembering that true conservatives are supposed to believe in states’ rights. Personally, I believe that he called out President Obama for not wastefully enforcing federal marijuana laws in Colorado and Washington because Republicans have a knee-jerk reaction to attack President Obama; once he came to his senses a bit, as much as Ted Cruz can come to his senses, he went back to the conservative position.

While Drug War reformers, marijuana legalization supporters and civil libertarians may oppose Trump and Cruz for a variety of reasons, Marco Rubio is the current existential threat to our cause. A Rubio Administration seems poised to use paramilitary SWAT-like raids upon nonviolent citizens following state cannabis laws. While extreme force and draconian federal sentences won’t really set back the marijuana movement, they will unnecessarily ruin lives and waste our resources. Reefer Madness Rubio must not be granted the keys to 1600 Pennsylvania Avenue.