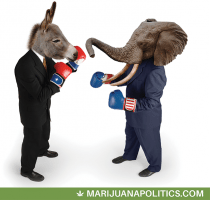 After months (years?) of campaigning in one of the more unique political seasons in modern American history, the Iowa caucus results are in. Republican Ted Cruz won a solid electoral victory while Marco Rubio won the political victory.

The Democratic candidates virtually tied, with progressive values winning the day, setting up a long campaign between a vision of major progressive change versus more incremental reform. Cannabis legalization supporters and civil libertarian activists can generally be pleased with the Democratic results. There is cause for alarm on the Republican side–the rise of Marco Rubio.

A tie really? How can it take so long for precincts to report? Who has all night for this?

A decisive electoral victory by Bernie Sanders would have been preferred by myself, and I believe most cannabis law reformers and many civil libertarian advocates, but Bernie Sanders could declare a political victory, even though he may not actually end up with quite as many votes or delegates as the establishment-favored candidate. Most media outlets, likely because they privately (and sometimes publicly) dismissed the idea that a 74 year-old democratic socialist from a small rural state like Vermont could actually take on the formidable Clinton political machine.

Senator Bernie Sanders declared a “virtual tie” and I think that this is an actual time that a “virtual” electoral tie is a “literal” political tie. (Hillary Clinton actually won two delegates by winning coin flips after precinct votes ended in ties. Update: 6 delegates won by coin flips!) Sanders proved that he is a worthy challenger while Hillary Clinton demonstrated that she is the frontrunner for a reason. The anti-establishment candidate called for a political revolution after declaring “virtual tie” while the establishment frontrunner declared a “sigh of relief” in a speech that listed a very progressive platform.

We accomplished what the political establishment said was impossible. Don’t underestimate us https://t.co/DeV0NhI2mi pic.twitter.com/CwH0mhkkT2

For various reasons, including the political ideals of Democratic-leaning voters, Hillary Clinton, will be decent on drug law reform and most civil liberties. The former Secretary of State’s foreign policy is a bit hawkish for my tastes, so I do fear potential losses due to national security fears in time of war, but not near as much as what I fear from the Republicans.

In politics, expectations can actually elevate the third place finisher over the winner

While Ted Cruz earned the most GOP votes and delegates, Marco Rubio became the big political winner by finishing in third place, setting himself up as the the Republican establishment candidate. The large number of evangelical Christians propelled Ted  Cruz to first place, the electoral demographics don’t look great for Cruz in New Hampshire and beyond.

Donald Trump seemed to be the political loser, finishing 2nd, as his “I’m a winner and we’re gonna win so much when I win” persona took a hit. It will be interesting to see how Marco Rubio fares in New Hampshire and South Carolina when the Donald starts attacking the new establishment standard-bearer.

For marijuana law supporters, Ted Cruz and Donald Trump, are likely to be rather states-rights oriented, while Marco Rubio is more likely to be a Reefer Madness-inspired disaster as he has pledged to waste scarce federal resources needlessly arresting and prosecuting nonviolent citizens following state laws and regulations. All of the Republican candidates, except Rand Paul (who unfortunately isn’t going to win the GOP nomination), seem all too willing to wage war, so all are threats to our civil liberties. Despite his rather libertarian past, I shudder at the thought of Donald Trump with his finger on the button.

Democrats will have a long battle, GOP will too unless Trump’s mystique fades away

So we’re on to New Hampshire, where Bernie Sanders and Donald Trump have been enjoying large leads in the polls. While civil libertarians and Drug War reformers have a tremendous candidate in Bernie Sanders and a good candidate in Hillary Clinton, we have a real danger on the Republican side–Marco Rubio. Marco Rubio provides a strong general election challenge, providing the GOP a young, new face from an important electoral vote-rich state.

Supporters of sensible cannabis policies and other civil liberty protections need to help ensure that Marco Rubio is not the next President of the United States. We definitely don’t want a Rubio-Kasich ticket as a prohibitionist ticket as elected candidates out of Florida and Ohio pose a serious challenge in Electoral College match.