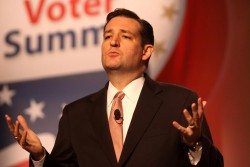 Ted Cruz has proven to be a formidable challenger in the GOP primary, with the latest national polls putting him in the top tier of candidates. With the presidency in mind, Texas Senator Ted Cruz has “evolved” on cannabis and flipped his position on marijuana legalization, now supporting the right of states to legalize the plant and regulate it in spite of the federal government’s prohibitionist policies. Appearing at the conservative conference CPAC earlier this year, Ted Cruz made clear that he would not crack down on legal marijuana should his presidential bid be successful:

“I actually think this is a great embodiment of what Supreme Court Justice Louis Brandeis called ‘the laboratories of democracy,’” the Texas senator said. “If the citizens of Colorado decide they want to go down that road, that’s their prerogative. I personally don’t agree with it, but that’s their right.”

These remarks certainly bode well with drug policy reformers, but Ted Cruz has not always held these views on the issue. In January of last year, Ted Cruz spoke out against the Obama administration’s policy towards states with legalized marijuana. According to Ted Cruz, Barack Obama should have sought action through Congress to reform the federal enforcement of marijuana. While Sen. Cruz did not provide clues as to what reforms he would endorse, he complained that people in violation of federal law were not put in prison:

“Now, that may or may not be a good policy, but I would suggest that should concern anyone — it should even concern libertarians who support that policy outcome — because the idea that the president simply says criminal laws that are on the books, we’re going to ignore [them]. That is a very dangerous precedent.”

Ted Cruz has come to reverse his position on this issue roughly a year later, joining a growing group of GOP leaders who have opted to tone down the prohibitionist rhetoric. Several other Republican candidates, such as Jeb Bush, Carly Fiorina, and Rand Paul, agree that the federal government should refrain from interfering with legal marijuana markets out of respect for the decision of states to regulate marijuana. Meanwhile, some candidates are still hoping to crack down on legalization, including Chris Christie and Marco Rubio.

The fact that Ted Cruz has changed his mind about legalization speaks volumes of the progress reformers are making in the United States. While only a third of self-identified Republicans believe marijuana should be legal, most Americans and young Republicans support legalization. In one year, Ted Cruz has gone from opposing to supporting states’ right to legalize marijuana. On one hand, this shows that reformers’ efforts have been successful in changing the minds of elected officials; on the other, it demonstrates how much time politicians can take in lagging behind changes in public opinion.