Is Donald Trump More Sensible Than Hillary Clinton on Marijuana? 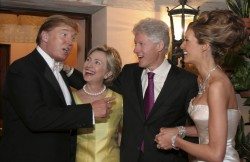 As his poll numbers continue to rise in the Republican primary, Donald Trump remains a focus of media attention. Building on his popularity among Republicans, the business magnate multiplies media appearances, giving journalists the opportunity to question him on his political positions on a variety of issues. Most of the discussion around Trump’s platform relates to his views on subjects like the economy and immigration reform, but many of us have been eager to find out where he stands on marijuana policy.

In more ways than one, Donald Trump appears unlikely to support major marijuana reform in the United States. Trump portrays himself as adamantly pro-police and “presented himself Saturday as the ‘law and order’ candidate in the 2016 presidential race, pledging to ‘get rid’ of gangs and give more power to police officers.” Like some early drug warriors, Trump is also known to hold views that some consider racist against immigrants from Mexico, whom he described as “rapists” in his announcement speech. And while he knew in 1990 that legalization is “the only answer” to the failing War on Drugs, he has opted to support prohibition anyway during his presidential bid.

This is why it was surprising to find out that Donald Trump strongly implied his support for marijuana decriminalization. Appearing on MSNBC’s Morning Joe on August 20, Trump explained that while he advocates for tougher measures against violent criminals, he doesn’t think people should be jailed simply for using marijuana:

Joe Scarborough: What about like marijuana? Should a kid be thrown in jail because he gets busted for marijuana?

Donald Trump: I don’t really think so. And I think that maybe the dealers have to be looked at very strongly. But then you have states all of a sudden legalizing it. So it’s sort of hard to say that you’re in one side of the border and you go to jail and you’re on the other side and can you go into a store and buy it. So there is going to be changes made there, Joe, and there has to be. But you just can’t. So when you mention the marijuana, that is a very tough subject nowadays, especially since it’s been legalized.

(via The Daily Caller)

Donald Trump seems like an unlikely ally for the drug law reform movement, and has yet to present concrete proposals on matters of drug policy, but this interview suggests he might be more reasonable on the issue of marijuana than some of his Republican rivals. (We’re looking at you, Chris Christie.) Considering the fact that he has also pledged full support to medical marijuana, it’s quite possible that Donald Trump is more sensible on drug policy than Democratic candidate Hillary Clinton, who has historically opposed marijuana decriminalization and teamed up with the prison lobby to raise funds for her campaign. It is rather amazing that Secretary Clinton, the Democratic frontrunner, may be less progressive on cannabis policy than anti-establishment candidate Bernie Sanders and the GOP frontrunner Donald Trump.

Other candidates should be pressed on questions of drug policy – and marijuana more specifically – as their answers could provide us with a measure of how much better (or worse) their drug policy positions are compared to Donald Trump’s.