As we have been reporting for the past few months, Chris Christie is the worst kind of Reefer Madness prohibitionist: the radical type that is willing to use military-style SWAT raids against nonviolent American who utilize cannabis, even in states that have legalized marijuana. He has even called marijuana users “diseased” and apparently feels that the best cure for such a disease is armed federal agents kicking down your door and pointing guns at you and your family.

As fellow blogger Romain Bonilla pointed out, Christie seems to be willing to trample the will of the voters in an attempt to get noticed by more Republicans ahead of the upcoming GOP debate. With so many people running, it is hard to get any attention in the GOP primary, especially with Donald Trump in the race. When many are asking, “How many clowns can they fit in that clown car?” Chris Christie has apparently decided that he will be the law and order presidential candidate that will enforce federal law, even if the law is clearly a failed and harmful policy. Chris Christie is the Cartman of the 2016 Republican Primary. And we must respect his authoritah! (South Park reference for those that don’t watch much Comedy Central). 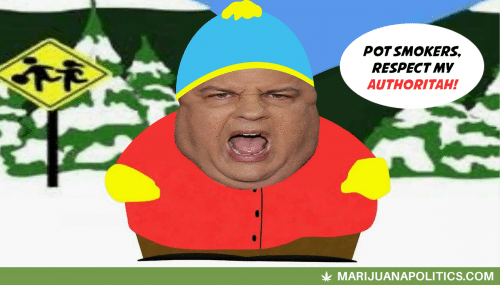 While Chris Christie is certainly a longshot to win the GOP nomination, and especially the presidency, it is important that we squash any notion that trampling the will of the voters is a sustainable political position. The cannabis community needs to continue to spread the word that Christie’s position is dangerous regardless of your political persuasion. Wasting taxpayer dollars and law enforcement resources to wage a war on nonviolent American citizens in states that have legalized marijuana should be abhorrent to anyone that cares about good public policy and our democratic principles. Let’s make it known loud and clear that we will never have to respect such authoritah from Chris Christie or any presidential candidate.