Which Daily Drug Use Is The Most Dangerous? 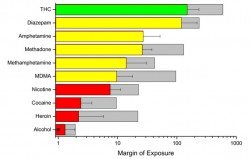 My conversation yesterday with prohibitionist author Dr. Ed Gogek MD included one portion where he made the claim that alcohol itself was no more dangerous than black tar heroin or crystal meth, but so many more people die from alcohol because it is legally accessible. So, apparently, because alcohol is legal and kills thousands of people, we must keep prohibited the marijuana that never kills anybody.

That bit of logical fallacy inspired today’s sharable graphic on a study released just this year comparing the relative risks of drugs of abuse. Previous studies had compared the ratio of effective dose (ED50) to lethal dose (LD50) to calculate a so-called therapeutic ratio. This method was criticized by some as failing to account for real-world use of these drugs, overemphasizing the dangers of some while minimizing the dangers of others.

The new methods is one called “Margin of Exposure”. It calculates the ratio between the “typical use” of a drug versus the “benchmark dose” at which adverse effects are felt. Thus, typical use might be more or less than the effective dose where a “high” is felt; infrequent users may not reach that point and users with tolerance may surpass that point. Benchmark dose doesn’t have to be the point at which drug users die; it can be the point at which they’re having an adverse reaction.

Measuring with Margin of Exposure, the researchers could drill down to the effect of individual daily drug use and compare that with the aggregate use by an entire population, from infrequent to chronic users.