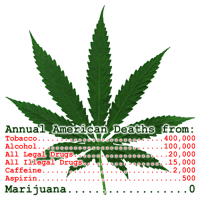 The Centers for Disease Control and Prevention (CDC) have issued a dire warning about the potential dangers of marijuana edibles death after a nineteen-year-old who consumed marijuana products died from a fall last April.

According to the National Survey on Drug Abuse & Health (NSDUH) figures for 2013, over one-in-eight Americans aged 12 and older (12.6 percent) consumed a marijuana product that year. Of those 33 million Americans, consumption was greatest in the 18-to-25-year-old age group. Almost a third of young adults (32 percent) consumed marijuana in 2013, or about 11 million people.

Levy Thamba was a nineteen-year-old student from Wyoming who visited Colorado last year with some friends. One friend over the age of 21 purchased marijuana-infused cookies legally from a marijuana store. The clerk instructed the friend that the cookie was six servings, or a cookie containing 60mg of THC, the psychoactive ingredient in marijuana (it was actually 65ng). The clerk also told him to consume only one-sixth of the cookie and to wait to feel the effects.

Thamba ate his one-sixth portion, but upon not feeling effects up to an hour later, he ate the rest of the cookie. For the next two hours, he behaved erratically and bizarrely, leading to his leap off of the hotel balcony, falling to his death four floors below. Thamba’s autopsy showed him to have 7.2ng of active THC per milliliter of blood in his system. Colorado’s presumptive stoned-driving limit is 5ng of active THC.

In comparison, former Denver WestWord marijuana critic William Breathes was once tested at 13.5ng after a full night’s sleep, KIRO TV-tested Washington medical marijuana patient Addy Norton came in at 56ng before her driving was considered “borderline” by a drug-recognition expert police trooper, and even the novice marijuana smoker KIRO tested was driving well at 21.7ng.

“This case illustrates a potential danger associated with recreational edible marijuana use,” writes the CDC about the estimated 2014 rate of 0.000003% annual deaths per marijuana consumer, a rate that triples to 0.000009% annual deaths per 18-25-year-old marijuana consumers. “Consuming a large dose of THC can result in a higher THC concentration, greater intoxication, and an increased risk for adverse psychological effects,” concludes the CDC, suggesting, “a need for improved public health messaging to reduce the risk for overconsumption of THC.”

In comparison, according to the World Health Organization, “alcohol is involved in up to 30% of adult hospital admissions, particularly those to emergency rooms.” The CDC reports that “alcohol is a main factor in one of seven deaths among Colorado adults between the ages of 20 years old and 64 years old.”

And yet, Google News Search shows 85 articles for “marijuana edibles danger” based on this CDC reporting on the one death among 33 million people who consume marijuana, describing edibles as “highly dangerous”, “Marijuana Overdose Danger”, and a “Hidden Threat”.

Meanwhile, in the state of Wisconsin, deaths from falls attributable to alcohol have surpassed drunken driving deaths for the last five years they have data. But try Googling “alcohol accident danger” and you’ll find not much reference to the numerous cases of drunk young people falling to their deaths. Try Googling “alcohol fall danger” and you’ll get the story of Levy Thamba within the first page of results.

Let’s make sure we really amp up the fear over the death of one student who over-consumed marijuana products and fell off a balcony, so we can drive home the message that you must consume marijuana edibles in small doses over lengthy periods of time. Maybe we could place that message in-between a couple of the beer ads during televised college sporting events.