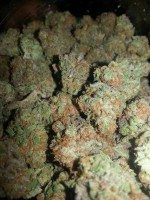 Oregon cannabis consumers are still wondering whether they will be allowed to start purchasing marijuana from dispensaries this October as Senate Bill 460 still sits on Governor Kate Brown’s desk. The bill only legalizes the sale of marijuana flowers, products such as concentrates, extracts and infused edibles will not be available to non-patients. Non-patients won’t be able to purchase marijuana products from state-regulated retailers until the Oregon Liquor Control Commission (OLCC) finalizes the testing, labeling and packaging rules for marijuana products. With licensing, regulation and taxes (eventually), cannabis consumers are wonder about a potential increase in Portland pot prices after Oregon cannabis commerce is legalized. The Oregonian reports:

Oregon marijuana has long been among the cheapest in the country. PriceofWeed.com, a website that tracks the cost of marijuana on the street, says high-quality pot is going for at least $30 less per ounce (an ounce is a little more than 28 grams) in Oregon than in nearby states, including Washington and Colorado.

A study by EcoNorthwest puts the average state price at around $180 an ounce – enough for at least 30 joints, usually – which roughly matches the Price of Weed site findings. EcoNorthwest estimates the legal market will cause that price to fall to $145. There are several reasons: competition between brands; more consumers entering the market now that it’s above-board; and more varieties to spread the dollars around.

But whether the price falls October 1 is a different question. That will depend largely on whether there is enough supply, whether there are enough medical marijuana dispensaries ready to sell to recreational consumers and how many people show up to buy.

It is hard to predict exactly what will happen to the price of marijuana in Oregon, but I can safely state that marijuana retailers will have to provide relatively low prices over time, or they won’t be able to compete with the underground market in Oregon. It was disappointing that legislation passed this year will increase the cost of OLCC marijuana licenses from $1,250, as approved by over 56% of voters, to more than $4,000 per license. Vertical integration of a marijuana retailer, producer and processor went from $3,750 to over $12,000 for marijuana businesses; this is just one of the costs that will ultimately be passed onto consumers.

A 25% tax on marijuana flowers will start on January 4, 2016, then all marijuana products will be taxed either at 17% or 20% in OLCC stores, depending on whether cities or counties pass the allowed 3% local tax. Even though the Oregon Legislature increased taxes and fees approved under Measure 91, the added governmental costs are still much preferable to virtually every other state with regulated cannabis commerce (medical or otherwise).  Also, many Oregon growers have a long history of cultivating arguably the best cannabis in the world. The competition among growers is fierce, keeping prices the lowest in the country.

Nearly everyday, I receive a text, phone call, email or Facebook message asking me whether Governor Kate Brown will sign SB 460. While I do have some good sources pretty close to the political situation, I don’t have a definitive answer for anyone, but all signs point to Governor Brown either letting SB 460 become law without her signature or even signing it into law within the next two weeks. The Joint Blog reported (“Oregon Governor to Sign Bill Allowing Legal Recreational Cannabis Sales to Begin October 1st“) that Governor Brown is expected to sign the bill, but didn’t cite a source. It certainly makes sense to provide a safe, regulated avenue for both Oregon cannabis consumers as well as tourists visiting the beautiful Beaver State.

We can expect an uptick in tourism dollars as many cannabis consumers add Portland to their travel agenda, bringing in extra revenue and helping the local economy. Cannabis commerce simply makes sense and more and more states will be joining the revolution, Oregon needs to help lead the way as early as possible. Tourists dollars will benefit all Oregonians and should be encouraged, starting with early sales allowed, but we should remain innovative and help lead the way towards establishing safe locations for adults to consume cannabis, like advocates are attempting in Denver, but that is for a future blog and piece of legislation…step by step.