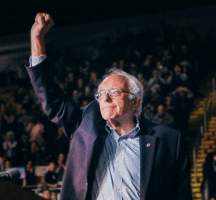 The Vermont Senator’s bill, S. 2237: Ending Federal Marijuana Prohibition Act of 2015, was introduced in early November. Going beyond the timid rescheduling out of draconian Schedule I, a common sense move somehow refused by President Barack Obama and supported only tepidly by Hillary Clinton, Sander’s legislation takes a vital step. Bernie’s bill, as explained in a blog here at MarijuanaPolitics.com, “would effectively end federal marijuana prohibition, treating cannabis similar to alcohol.” Senator Sanders is exactly correct in terms of handle cannabis legally, i.e. de-scheduling or delisting instead of merely rescheduling. See De-scheduling is the new Rescheduling: Moving the Cannabis Reform Goalposts.

Sadly, Bernie’s superb bill is going nowhere. Unfortunately, the Vermont Senator’s signature languishes in loneliness, shunned by senate colleagues who should be sympathetic. No other senators have joined Bernie’s common sense bill.

The GovTrack website tracks all federal legislation. S. 2237 can be tracked there.

The news there is not good, showing no cosponsors, and remaining at the first stage (Introduction) of implementation. The next step would be going committee (Judiciary) for hopeful passage onto the full Senate. Unfortunately, the Judiciary Committee is filled with long-time cannabis prohibitionists, like Jeff Sessions and Chairman Chuck Grassley. So good luck. The GovTrack website rates Sanders’ bill chances for approval and signing by the president at 1%.

Still, the absence of support by other senators for cannabis de-scheduling is ominous. The other major pending cannabis legislation, S. 683, the CARERS Act gained 15 cosponsors in the Senate. Tragically, GovTrack also gives this bill on a 1% chance of getting past committee and 0% chance of implementation

Original sponsoring senators of the CARERS Act, Cory Booker, Kirsten Gillibrand and Rand Paul have been joined by 12 other, mostly democratic senators, including both Oregonians Jeff Merkley and Ron Wyden. The entire list is:

These senators showed common sense in supporting the CARERS Act; if any of these are your senator, please contact them and urge them to cosponsor S 2237, Bernie Sander’s bill to de-schedule cannabis altogether.