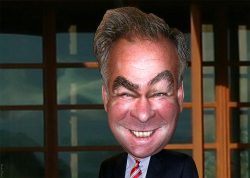 Hillary Clinton’s disdain for marijuana law reform is apparent in her choice for Vice President, Virginia Senator Tim Kaine. Just like Barack Obama’s marijuana-hating Joe Biden, she has chosen a cannabis prohibitionist for second in command.

For many MarijuanaPolitics.com readers, a politician’s votes and actions on cannabis legislation, medical use and personal liberty, especially the freedom to medicate with cannabis, are keys to our votes. Although cannabis is not the only criteria many of us consider in casting votes and providing political support, it is probably the most important. After all, marijuana policy is so telling of the candidate’s views on personal freedom, medical choice, legislating by science not dogma, and general sense of justice. If they are not opposed to the idiocy of America’s war on marijuana, then they forfeit our votes.

Tim Kaine’s regressive and repressive views and votes on marijuana recently earned him into a “hall of shame” over at StopTheDrugWar.com. Just last month, they consolidated NORML’s congressional scorecard, and displayed the names of 26 current US senators to whom they have given an “F” rating on marijuana prohibition. Unsurprisingly, only four were Democrats; unfortunately, one of those four prohibitionists is Tim Kaine. He recently said:

I wouldn’t vote for a law at the federal or state level that would decriminalize marijuana.

Now both Republican and Democratic parties will have only prohibitionists at the VP position, as Tim Kaine joins with Donald Trump’s VP choice Mike Pence in hating on marijuana. By contrast, Libertarian Gary Johnson’s VP choice, Bill Weld espouses an excellent cannabis policy, and supports ending the “vastly counterproductive” war on drugs.

“One Out of Four US Senators Is a Marijuana Prohibitionist — Is Yours One of Them?”