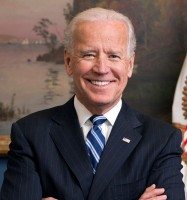 His drug warrior, anti-marijuana zealotry in devising ever harsher governmental punishments, including prison mandatory minimums, nearly guaranteed prosecutions, and asset forfeitures exceeded even the most authoritarian Republican fanatics, with whom he enthusiastically worked.

A bigot is defined as “a person who hates or refuses to accept the members of a particular group (such as a racial or religious group).” Oregon cannabis attorney Leland Berger uses the term “cannabigotry” to recognize the bigotry inflicted on that massive group of people who share the choice to use cannabis. Former Oregon news anchor Cyd Maurer describes how she lost her job to cannabigotry, in a legal state, no less.

Harms often including, but also often far more wounding than loss of job befall those 700,000 Americans who are STILL arrested each year for possession of cannabis. These cruel and unjust drug war damages to our fellow citizens and society are the product of one man, more than any other: Joe Biden. His grandfatherly, sometime goofy persona hides a calculating Torquemada who has inflicted incalculable damage to individual Americans, their families, and their neighborhoods. NORML’s Allen St. Pierre observed,

As former chairman for the Senate Judiciary Committee, Biden is the person most responsible for passing a package of laws in the mid-80s that we think of as today’s drug war.

Actually Biden’s drug war zeal carried on into the 1990s with such authoritarian obscenities as the Rave Act, and into the 21st Century with massive programs to export the drug war across the globe.

Interestingly, the term “liberal” is an antonym for bigot.

Many democrats and mainstream news reporters call Biden liberal, even “unabashed liberal”. Seemingly unaware of Biden’s drug war evil, many democrats who think of themselves as liberal seem to like him and back his candidacy. Back in the ’90s when Republicans and Democrats competed to be tough on crime and zero tolerant to drugs, Biden defined liberal to big government Republican Senator Warren Hatch, R-Utah:

Joe Biden has backed up this lock-em-up swagger with decades of ever more punitive legislation. What we got was not so much 100,000 cops on the beat, but 5,000, 20-man SWAT squads bedecked in the latest military costumes and driving tanks to bust pot farmers. What we got was far more than 125,000 new jail cells, we ended up with over two million caged Americans, far more than any other nation.

Biden played the central role in creating the office of drug czar, and his cannabigotry is clearly shown by his eagerness to force the drug czar to lie about cannabis and its medical value. The drug czar is restricted from any positive discussion of cannabis and commanded to resist any move towards legalization, at the specific behest of Joe Biden. His entire career in congress consisted of passing one excessive drug war legislation after another, creating mandatory minimums, civil asset forfeiture, and militarized police incentivized to enforce drug violations instead of actual crimes. He told ABC news, ” I still believe it’s a gateway drug. I’ve spent a lot of my life as chairman of the Judiciary Committee dealing with this. I think it would be a mistake to legalize.”

The answer, apparent by Obama’s reform timidity and refusal to reschedule cannabis, is

Biden likes to say that he has just been carrying out Obama’s drug policy, but really it has been the other way around.  Obama has done little to end the government’s war on cannabis, other than to accept the working of the Cole Memo, a document penned by an deputy attorney general to the former Attorney General Eric Holder. Only this thin restraint holds back massive federal bureaucracies like the DEA and federal prosecutors from again descending like harpies on medical and adult-use legalizations recently authorized by voters in many states.

This fragile protection, the Cole Memo, could be easily wiped aside by an anti-cannabis President Chris Christie, or President Marco Rubio, or President Joe Biden. SWAT teams could again prey on dispensaries, asset forfeitures could expand the robbing of families of their property, and prosecutions could target and deny medicine to marijuana refugees, families that have moved to medically legal states for treatments, especially for childhood epilepsy.

Joe Biden recently suffered the loss of his son Beau to brain cancer. This writer extends his condolences, and dislikes using the Vice President’s misfortune to make a point, but must bring up the glaring fact that gliomas and other brain cancers may well be best treated with marijuana cannabinoids. We don’t know this for sure because American research has been halted, and we must rely on research from Spain and Israel, in good part due to Joe Biden’s cannabigotry and anti-legalization, anti-rescheduling obstinacy. With marijuana at Schedule I, it is defined as having no medical value and is not available for research in in this country. Although it is too late for Beau Biden, other victims and future sufferers of brain cancers deserve unrestricted research into the huge potential for cannabis in finding treatments and cures. Joe Biden should show some compassion and fight to end this Schedule I idiocy and cruelty, so that other fathers may not suffer his profound grief. But there is zero chance he will do so.

From a drug policy and cannabis law reform perspective,  of all the Democratic Party candidates for president, Joe Biden is the worst choice.