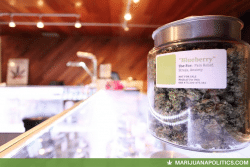 The Oregon Health Authority has released the first draft of the rules to implement Senate Bill 460’s limited retail sales of cannabis for adult-use beginning on October 1st.

According to the initial draft of the rules, all existing medical marijuana dispensaries will have the option to sell limited marijuana retail products to adult-use consumers 21 and older – starting in just 42 days.

Oregon’s cannabis dispensaries are ready to go, and have been prepping for months to meet the state’s adult-use retail cannabis market. This interim period is a great way to provide a boost to Oregon’s cannabis businesses while reducing black market purchases.

The rules are pretty much exactly as expected based on what was passed by the legislature this session, and look nearly identical to the content of SB 460. The bill, signed by Governor Brown in late July, called for the OHA to determine by rule precisely how the October 1st limited retail sales for responsible adult use would occur.

In this week’s draft, few specifics were provided and it’s clear there’s still more work to do.

Here is what made it into the rules that pretty much everyone expected:

Here were some more unusual or unexpected things from this week’s draft:

Overall, this is a step forward toward starting Oregon’s legal cannabis economy, and it’s a step in the right direction. This initial draft is not perfect, but the OHA has been handling this issue with a considered approach and has demonstrated a willingness to listen to both businesses and consumers.

In a statement released on Wednesday, OHA has stated “comments specific to SB460 rules may be directed to medmj.dispensaries@state.or.us until August 26, 2015.” so be sure to tell them what you think!

Editor’s Note: With these new October 1st, rules announced and the OLCC rulemaking process underway, the upcoming Oregon Medical Marijuana Business Conference (OMMBC) on September 12th & 13th is a great opportunity to get the latest information any cannabis industry entrepreneur would need.

Casey is the Executive Director of the Oregon Cannabis Retailers Association (ORCA). Before being selected to lead ORCA, Casey managed the Eugene Office for the New Approach Oregon Vote Yes on 91 campaign to legalize and regulate marijuana.