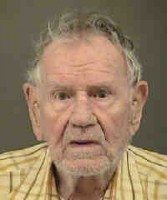 This Tuesday, I was honored to be selected as the pro-legalization side in the first-ever public debate on marijuana legalization at Texas Christian University.  Opposing me was Ben Cort, a board member of Project SAM, the nation’s anti-legalization lobby.

At one point in the debate (and I’m paraphrasing, since I was contractually forbidden from recording or live streaming), Cort said, “I talk to a lot of police officers, and I ask them if they’ve ever arrested anyone for simple possession of marijuana alone and their answer is no.  We really don’t arrest and lock up a lot of people for marijuana in this country.”

A 94-year-old man has been charged with felony possession of marijuana, according to the Mecklenburg County Sheriff’s Office.

Ponischil does not appear to have a lengthy criminal history in the state. A background check revealed only minor traffic violations.

Here’s the arrest, in case Ben Cort’s reading.  Tax money was used to catch a 94-year-old marijuana consumer.  I’m sure the people of Charlotte, North Carolina, are all resting safer knowing this veteran was taken into custody.

UPDATE: One of my listeners to The Russ Belville Show on 420RADIO.org provided this information (thanks JT):

I contacted the reporter, Elisabeth Arriero, by e-mail. She didn’t give me any more information, and said she was not planning a follow-up story. The lack of details of this incident are maddening.

I also called N.C. NORML, but only got an answering system. I left them the basic info on the recording.

One person in the comments section after the article, Melba Tarlton actually knows Mr. Ponischil. She gave this information about him:

>>>”I KNOW THIS MAN PERSONALLY. Let me assure you that Douglas is a fine man. He served our country in WWII and as a Captain in the Merchant Marine and Naval Reserve, activated during the Korean Conflict. He and his crew of 33 survived when the Germans torpedoed and sank his ship off the coast of Haiti during WWII. I have no doubt there are some explanations for what put him in this position, because he is a very fine gentlemen. I feel sorry for him to be in this position at his age, and all the sacrifices he made for our country. I hope the arresting officer reads this.”

>>>”John, he does have family, but sadly they do not pay much attention to him or his care. I just learned he is out of jail. He is hopeful the charges will be dismissed when he gets his day in court. Nevertheless, this must have been a horrible and humiliating experience for this war veteran. Thanks, John.”

Another activist, Adela Wisdom – of POW 420, got involved and found this information:

During our debate, Ben Cort often made vague references to some sort of decriminalization that he’d support.  It’s the rhetorical trick of Project SAM’s I call the Kinder Gentler Drug War maneuver.  We’re at the point now where everybody is recognizing the futility and cruelty and absurdity of the Drug War, so it is difficult for them to be seen as supporting it.  So Project SAM pivots to this idea that we shouldn’t arrest and lock up and saddle with criminal records the people who get caught with personal amounts of marijuana.  (Growers and sellers?  SAM says lock ’em up.)

That’s North Carolina.  It was one of the states in the 1970’s (when Douglas was merely in his fifties) that decriminalized personal possession of marijuana.  Yup, for about forty years, possession of less than a half ounce is a non-arrestable misdemeanor with a $200 fine.  Problem is, you can be arrested for more than half an ounce and as Adela Wisdom notes, over 1.5 ounces is a felony.

Project SAM wants to maintain a penalty of some sort against personal adult use of marijuana, but reduce the consequences to the majority of adult users to just below the level of outrageous headlines and depressing statistics.  Things like the US leading the world in incarceration, college kids losing scholarships, innocent people and their dogs getting shot, racially disproportionate arrest statistics, and yes, 94-year-old men being led off in handcuffs for having too much marijuana.