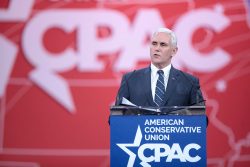 The Republican Governor of Indiana is an arch-conservative zealot of the most regressive type, badly out of touch, wrong on nearly every key issue for the 2016 election.

Of particular interest to MarijuanaPolitics.com readers are Pence’s particular views on marijuana.  In short, they are are ridiculous, actual “reefer madness” silliness with hideous consequences. His state of Indiana is a hold out in the war on marijuana, still inflicting severe penalties on users and discouraging medical use.

Oregonians and other American adults in four other states can enter a shop an buy marijuana buds, extracts and edibles. In 20 other states, those in medical need of cannabis’ profound healing and helping powers can likewise get the medical marijuana they need. In Indiana, they have no such medical freedom. Any possession of marijuana is still treated — and punished — as a serious crime.

Pence is an enthusiastic supporter of the war on drugs, especially marijuana. His views could not be more incorrect on the benefits and dangers of cannabis. And, incredibly, while he demonizes marijuana, he is an apologist and denier for Big Tobacco. He actually claims that cigarettes do not cause cancer, and are not a major health hazard. He has discouraged tobacco control and cigarette smoking cessation programs in his state. In the year 2000, 36 years after the Surgeon General’s Report on Smoking and Health, Pense claimed,

Time for a quick reality check. Despite the hysteria from the political class and the media, smoking doesn’t kill.

Cigarettes are indeed hugely harmful to health and prematurely kill over 1,000 Americans each day. But, the remarkable reduction in cigarette use by Americans in the last generation is a huge win for public health. Little known and lesser celebrated, cigarette consumption by Americans has dropped precipitously. American cigarette smoking has “declined to an all time low,” all without arresting or jailing one person. This hugely successful public health, harm-reduction approach worked, just as the draconian, zero-tolerance, prosecution, and incarceration attempts to reduce marijuana use have all failed utterly.

Yet Mike Pence would quash the successful anti-cigarette strategies while doubling down on the authoritarian prosecution of the failed war on (some) drugs, particularly marijuana. The lawyer and former talk show host is been handsomely compensated by tobacco companies, the apparent source of his bizarre views on cigarette smoking and health.

MarijuanaPolitics.com readers know that a candidate’s policy on marijuana, hugely important in its own right, also tells much about said candidate’s policies on many issues. America’s disastrous war against marijuana is a key issue of government overreach. Mike Pence’s hard-line on marijuana is echoed by his severe stances on women’s right to choose, marriage equality, separation of church and state, and his parochial, anti-science views on the teaching of evolution and denial of climate change.

Another ominous fact: with Trump giving the Vice Presidential slot to Pense, chances are if elected he will award the Attorney General position to Chris Christie.  As reported here, the portly ex-prosecutor desperately needs a job (beyond fetching Trump’s laundry) and would relish the power of Attorney General. A top Christie goal, one that would be shared by Vice-President Mike Pence, is to reassert federal authority over marijuana and smash state legalizations.