Feel The Johnson: Getting Gary (and Marijuana) Into The Presidential Debates! 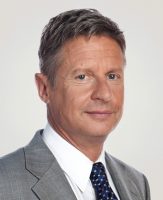 Libertarian Presidential Candidate Gary Johnson adds a clear and sensible alternative to the 2016 election. Should he qualify for the the Presidential Debates, he will bring cannabis reform to the national stage. Governor Johnson will argue for winding down the drug war, ending marijuana prohibition, achieving smaller government, and pursuing a far less counterproductive foreign policy.

If the former New Mexican governor can poll at 15% (he already attains about 10%), he will qualify for the Presidential Debates taking place in the fall. Not only would this promote on the national stage issues important to many MarijuanaPolitics.com readers, it would also give the Gary Johnson/Bill Weld ticket a real shot at the Presidency. For those of us waiting frustrating decades for excruciatingly slow progress on federal drug law and cannabis reform, a Gary Johnson Presidency would immediately change everything.

Gary Johnson intends to win the presidency. He will be on the ballot in all 50 states. Featured in an excellent Washington Post article by David Weigel, Johnson comes off as an extremely reasonable alternative to Trump and Clinton, the two most disliked candidates in modern history. Quiet talking, the man has climbed Mt. Everest. His next extraordinary feat may well be to achieve the presidency. And ex-governor Bill Weld personifies a solid vice-presidential choice.

Gary is sane and sensible, refreshing qualities in the 2016 race so far. He claims his moderate policies reflect those of most Americans. He would not abolish the EPA, for example, but he would work for smaller government as he did successfully in his home state. He would end the prohibition of cannabis and undertake a major move towards harm reduction as American drug policy, steps favored by a majority of Americans. His foreign policy will be far less aggressive than his predecessor presidents. Like Barack Obama and Bernie Sanders, unlike Hillary Clinton, he opposed the Iraq War, linchpin to the current ISIS threat.

Like the Great Solar Eclipse set to sweep across the USA in August 2017, a unique alignment of disliked candidates, Trump’s political gaffs, wide distrust of Hillary, and the possible surge of two moderate, thoughtful, and articulate Libertarians may for the first time allow a third party to eclipse the others and to triumph in November 2016. As President Gary Johnson, he would begin his term with a relieved congress, an appreciative electorate, and a mandate to, among other changes, end federal marijuana prohibition. Gary did a  great job as chief executive of New Mexico during his two terms as popular governor;  he would do the same for the country.

Some voters are leery of casting third party ballots out of fear of “wasting” their vote and allowing the worst alternative to prevail.

Should he not win the presidency, it is difficult to say how a vote for Johnson affects the contest between Republican Trump and Democrat Clinton. Presumably a voter’s choice of Johnson would take away a vote for one of the other candidates. A Johnson voter, however, may have simply not voted at all, or have not cast a presidential choice. Johnson’s approach to governing does provide a sharp contrast to both the better known candidates, and could take votes from either.

Much of Bernie Sander’s appeal, especially to youth, came from his positions on criminal justice reform and marijuana legalization. These same voters will likely appreciate Gary Johnson’s positions on these issues as the are quite similar to those championed by Bernie. It is possible that some Democrats in this group might choose to support Gary Johnson over Hillary Clinton. On the other hand, some of Bernie’s economics diverge sharply from the much more liaise-fair policies of the former Republican governor.

Clinton’s role in the disastrous 1994 Crime Bill, her ties to private prison industries, and her lack-luster, halting stance on marijuana law reform make Gary Johnson seem like a breath of fresh air and a valid alternative for young voters. Her reluctance to join the majority of Americans who believe marijuana should be legalized may cost her votes when given the alternative of Gary Johnson and his freedom-based, harm-reduction approach to cannabis, and to the failed war on drugs.

As far a Johnson vote detracting from the Trump vote, now even Republicans as mainstream as 2012 candidate Mitt Romney suggests he may vote the Libertarian ticket. Such a remarkable defection could lead to major hemorrhage of Republicans repudiating Trump while voting for a low-tax, small-government, and personal-liberty protecting candidate Gary Johnson. To be sure, neocon Romney’s views on cannabis prohibition and in supporting aggressive foreign policy are nearly the opposite of those expressed by Gary Johnson.

Johnson’s reasonable immigration policies put him at odds with most Republicans, especially Trump supporters, but may well endear him to the enormous Hispanic vote. Gary Johnson’s highly successful two-term governorship of the border state, New Mexico, puts him at sharp contrast to Donald Trump, who has never held any office. As a private entrepreneur he bootstrapped his own election, and won easy reelection as a Republican in a blue state. As Gary says in a CNN editorial,

America may finally be ready for a presidential candidate who believes in the free market, but rejects crony capitalism. They may be ready for a candidate who actually governed a border state…and DOESN’T believe that a Great Wall is a substitute for immigration reform that today’s politicians cannot summon the courage to enact.

What does the Johnson/Weld ticket need to succeed in November?

Gary Johnson, entrepreneur, adventurer, climber of the highest peaks on seven continents, successful governor, is the most qualified of the three presidential candidates to next lead the USA. Help him get into the debates, and then into the White House.   Check out his video, “Why I am Running for President.”