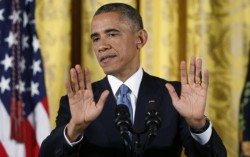 At the twilight of his presidency, Barack Obama leaves unmet the huge need to change federal cannabis law.

President Barack Obama will soon leave office. Although he will re-enter private life as one of America’s better presidents, he has failed to address the calamitous war on drugs, especially the eight-decade crusade against marijuana.

The laws against cannabis are clearly some of America’s most unjust, inflicting upon our country dozens of legal, social, and medical evils. The absurd and tragic legal status of marijuana desperately needed a fix during his administration. Instead, President Obama let a historic opportunity to slip through his hands, as he allowed his DEA to recently decide to maintain the idiotic and cruel Schedule I.

Obama’s inaction on rescheduling leaves terrifyingly vulnerable liberty’s small victories, such as the 2011 Cole Memo to US attorneys. The Cole Memo gave guidance to federal prosecutors and has allowed state-regulated marijuana systems to flourish, but will Cole retired and President Obama exiting the White House, the slim protections for cannabis possession and sale in legalized states afforded by the memo are subject to the whims and prejudices of the next president and justice department. Even Obama’s Supreme Court nominee has already ruled for continued cannabis prohibition.

Thankfully, some protections now exist beyond the Cole memo, namely the Rohrabacher – Farr congressional amendments that prevent the Department of Justice from prosecuting state legal medical operations. But these desperately needed protections were brought about by freedom fighters in Congress, not by President Obama. They were in fact opposed by Obama’s justice Department and continually violated by federal prosecutors after becoming law. Fortunately, recent court rulings have helped restrain rogue prosecutors. Existing only as a budgetary amendment, legislative provisions stripping the federal government from prosecuting cannabis industry participants following state law must be renewed yearly.

The draconian Schedule I status of cannabis, set 45 years ago by the black and hippie-obsessed President Richard Nixon, turned America’s drug laws into a nightmarish, Orwellian system of harshness and cruelty as over 20 million fellow citizens have been arrested and punished for marijuana. Successive Presidents, from both parties, played “the marijuana card” from paraquat spraying, to “Zero Tolerance,” to “Just Say No” campaigns, cranking up penalties and prosecutions. Finally, with the election of Barack Obama, those millions of Americans opposed to marijuana prohibition and against the federal war on drugs thought they had a “Yes We Can” ally in the White House.  Instead, the motto seemed to have switched to “No I won’t” as President Obama refused to lift a finger to end this toxic war on science, health, and freedom. There has been some small incremental changes, but that really isn’t the change that we signed up for.

Beyond the Cole memo, along with some amnesties granted to a few hundred drug “criminals,” Barack Obama has done little to challenge the great damages still being done by the war on drugs, particularly to communities of color. In the case of cannabis most of his actions reinforced prohibition. President Obama:

The marijuana nightmare Obama leaves behinds has categories of horrors. Continued Schedule I status for cannabis is a:

The banking and tax nightmares would not end if cannabis were to be downgraded to Schedule II, the goal of the languishing CARERS Act. Only downgrading to Schedule III (like Marinol) would help with these issues. Actually, while any down scheduling is better than Schedule I, any schedule in the Controlled Substance Act, even Schedule 5, would leave huge problems.

Federal prohibition needs to end with the total removal of cannabis from the CSA. As only Bernie Sanders has proposed, it would be far better if cannabis were treated like alcohol and tobacco under federal law, even though it is far safer than either of those deadly drugs.

President Obama had the power to do great good, instead he failed to end the caustic, cruel, and counterproductive federal prohibition of cannabis. We got a little change, but we could have, and should have, gotten more.