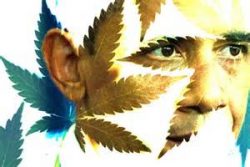 President Obama has a rare opportunity to make history by rescheduling marijuana.

As it so happens, the DEA is currently deciding on a five-year-old petition to reschedule marijuana, supposedly in the first half of 2016. This decision coincides with some of the final months of the Obama administration. This coincidence makes it easy for the President to accomplish a major, desperately needed reform of federal marijuana law.

Marijuana has been mislabeled and demonized as a Schedule I drug for nearly half a century. In 1970 Richard Nixon wanted marijuana laws he could use to “tear the ass out” of hippies and anti Vietnam war protesters. He easily got what he wanted, when congress “temporarily” classified marijuana as a Schedule I drug, the worst of the worst, along with heroin. Cannabis was (and is) defined by Schedule I as having no medical value and being highly dangerous and addictive, and subject the the very harshest federal penalties.

Nixon successfully made fellow Americans criminals and enemies of the state. Like a dead hand, Nixon’s signature over 45 years ago has since overseen the marijuana arrests of nearly 20 million Americans. The broken relationships, torn families, destroyed careers, harsh jail sentences, and plain human misery caused by this massive persecution of its own citizens by the US government is a national shame. The fact that decade after decade go by with no change in this most corrupt of all federal laws is inexcusable.

Forty years later, cannabis activists, people interested in medical marijuana, and believers of personal freedom had high hopes for cannabis policy change during the Obama administration. And while the President jokes about his personal use and correctly states that marijuana is safer than alcohol, Obama has done very little to actual change cruel and idiotic policies.

Obama’s inaction on rescheduling leaves terrifyingly vulnerable small victories, such as the 2011 Cole Memo to US attorneys. James M. Cole was Deputy Attorney General (retired 2015) to the previous Attorney General, and soon, to the previous President. The slim protections for cannabis possession and sale in legalized states afforded by this memo are subject to the whims and prejudices of the next President and Justice Department. Even Obama’s Supreme Court nominee has already ruled for continued cannabis prohibition. If the next Attorney General is Chris Christie, for example, the memo would be soon renounced and revoked.

Now though, the DEA has announced that an old petition requesting rescheduling marijuana to Schedule II will be decided upon in “the first half of 2016.” Since 1972 activists have sought to change this ridiculous and damaging status. The DEA has responded by stalling, is one case for 22 years, before deciding (on its own) to maintain Schedule I. The current petition to reschedule was raised in 2011 by two governors dealing with state legalization, so this time the DEA has stalled five years. If it follows the pattern of all previous petitions, the answer will be no change.

When President Obama has been asked about rescheduling he acts powerless, saying that congress makes that decision.  But actually the DEA, an agency in the Justice Department, has been given the power to schedule drugs. For example, Marinol, which is 100% pure synthetic THC, is a Schedule III drug, having been down-scheduled from Schedule I by the DEA itself. And now the imminent rescheduling decision is again being made by the DEA.  Surely, as the ultimate boss of the Attorney General and the entire Justice Department, Barack Obama, could certainly be “the decider” and instruct the DEA to grant the petition.

The rescheduling of cannabis from Schedule I to Schedule II would be historic and would decrease some major harms. It would make research far easier, and soften criminal penalties for marijuana “crimes,” such as possession and sale. But a change from Schedule I to II would classify marijuana as only a slightly less dangerous drug with some medical uses. Schedule II would equate it with cocaine, instead of the current Schedule I heroin. Schedule II would NOT help with IRS 280e rule, and probably not solve banking problems suffered by cannabis entrepreneurs. And Schedule II might replace the jack boot of the DEA with stringent FDA regulations that could strangle current medical cannabis entrepreneurs and disrupt access to their medicine by patients. It is debatable whether Schedule II is all that preferable to Schedule I, as long as the Cole Memo is in place.

Even at Schedule V, marijuana would still be classified as a drug in the Controlled Substances Act. Cannabis should be removed entirely from the CSA. This is what is proposed in Bernie Sander’s Senate Bill 2237: Ending Federal Marijuana Prohibition Act of 2015.  Although cannabis is far safer than alcohol or tobacco, the two deadliest drugs, classifying cannabis as a regulated consumer product like these two drugs may be the best option.

Even though the current rescheduling petition asks that cannabis only be moved to Schedule II, it is likely, at least at the President’s insistence, that it could be placed lower. After all, if the DEA can reclassify Marinol, at 100% THC as Schedule III, certainly it could do the same with cannabis.

The opportunity to reschedule cannabis has been handed to President Obama on a silver platter. Mr. President, do your duty and down schedule marijuana now.