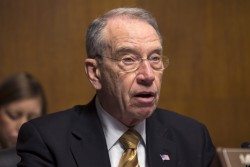 His inaction as head of the Senate Judiciary Committee is all that is needed to stop the CARERS Act. The historic, bipartisan Compassionate Access, Research Expansion and Respect States Act is Senate legislation that would reschedule cannabis off its current draconian Schedule I, and ease other marijuana policies and restrictions on research. It now seems unlikely it will make it to full Senate Judiciary Committee for hearing or vote, because of one senator’s misguided mission.

Cannabis rescheduling, especially away from the current (since 1970) draconian Schedule I, is a hugely needed reform. Down scheduling, even to Schedule II, wouldn’t solve all important human rights and criminal justice travesties, but it could help open up cannabis medical research, and eventually move us towards fixing cannabis industry banking problems and tax problems.

Ironically and tragically, of over 200 million adult Americans, Iowa Senator Chuck Grassley is perhaps the least qualified all to be “the decider” concerning federal marijuana regulation. His drug war zealotry and cannabigotry stretch for decades. He has always supported the worst excesses of the war on drugs, including mandatory minimums, civil forfeiture, and harm maximization to cannabis users and their families. He has always fought any loosening of federal marijuana laws. And yet Chuck Grassley is the person who lets live or die the CARERs Act and with it marijuana rescheduling. It looks like he intends to let it die. Back when the bill was introduced he said:

I oppose moving marijuana from a Schedule I to a Schedule II drug, based on the current science on the risks and benefits.

At the same time, he says forms of medical marijuana should be studied more, knowing full well that Schedule I status makes research nearly impossible. By the way, Grassley is also chairman of the US Senate Caucus on International Narcotics Control, a post from which he struggles to maintain hardline conventions, a half century old, against marijuana and other drugs.

Should Grassley move the bipartisan CARERS legislation to committee, it may receive a frosty reception from such members as Jeff “I am a big fan of the DEA” Sessions, a former prosecutor who, like all prosecutors, benefited greatly from easy, shooting-fish-in-a-barrel marijuana and drug cases. Orwellian drug laws passed in the 80’s and 90’s made prosecutions ever easier, and district attorneys, attorneys general, and federal prosecutors were quick to build resumes by quintupling America’s prison population. Other drug war dinosaurs populate the committee, but some support CARERS. The legislation deserves a hearing and vote.

If not now, when?

If the CARERS Act is smothered by Grassley or killed in committee, it is difficult to see how cannabis will ever be rescheduled. All the Republican presidential candidates, with the exception of Rand Paul, oppose cannabis law reform. Some, like Chris Christie, want to reinvigorate the federal war on marijuana. The probable Democratic Party candidate, Hilary Clinton, has expressed only tepid interest in cannabis or drug war reform.

In congress, some senators and representatives fully see how continued prohibition, and especially Schedule I persecution of cannabis is counterproductive and fundamentally un-American, but the Republican-controlled congress is still authoritarian and supports the war on drugs.

Finally, the US Supreme Court has been complicit, over the past four decades, in creating a variety of drug war exemptions to the Bill of Rights.  SCOTUS, especially the far right wing of Scalia, Thomas, Roberts, and Alito will always decide in favor of cannabis prohibition.

Incredibly and tragically, marijuana has been falsely scheduled for 45 years. Will it still so be 45 years hence?