National Families in Action Misleads on Marijuana Use Trends 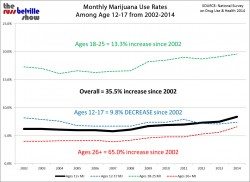 The prohibitionists continue to dig through the latest data in the National Survey on Drug Use & Health, looking for the evidence on marijuana use trends that show ending the punishment of adults who use marijuana will turn the youth of our nation into pot zombies. (In my other articles, see how the Community Anti-Drug Coalition of America, Oregon’s Project SAM affiliate, and National Project SAM have already spun and outright misrepresented the data.)

Today the spin comes from the National Families In Action, where they’ve published a chart showing the increases from 2013 to 2014 in marijuana usage among teens (12-17), college age (18-25), and adults (26+), as well as the entire population aged 12 and older. 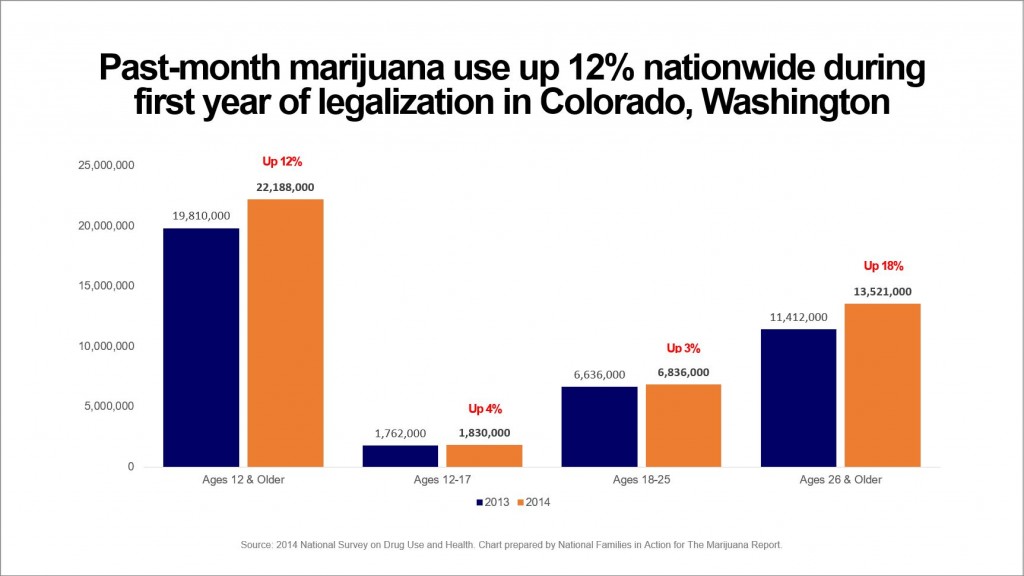 Where the misleading comes in is claiming that this change is “the first year of legalization in Washington and Colorado”. 2014 was the first year of legalized marijuana markets in Washington and Colorado. Marijuana possession and, in Colorado, cultivation, was legal throughout 2013. If we look at the changes for youth, college, and adult monthly marijuana use since 2012 (the full year before legal adult possession), the changes are increases of 2.8 percent, 4.8 percent, and 24.5 percent, respectively.

In other words, teen use went up by a statistically insignificant amount, college use increased, and adult use went way up.

Looking further back, prohibitionists back in 2011 told us that our efforts to legalize marijuana in 2012 would surely send the wrong message to the kids and greatly increase marijuana use. But when you check the rates of use since 2011, college use has increased 3.2 percent while adult use has skyrocketed by 37.5 percent. Teen use, however, is down 6.3 percent. 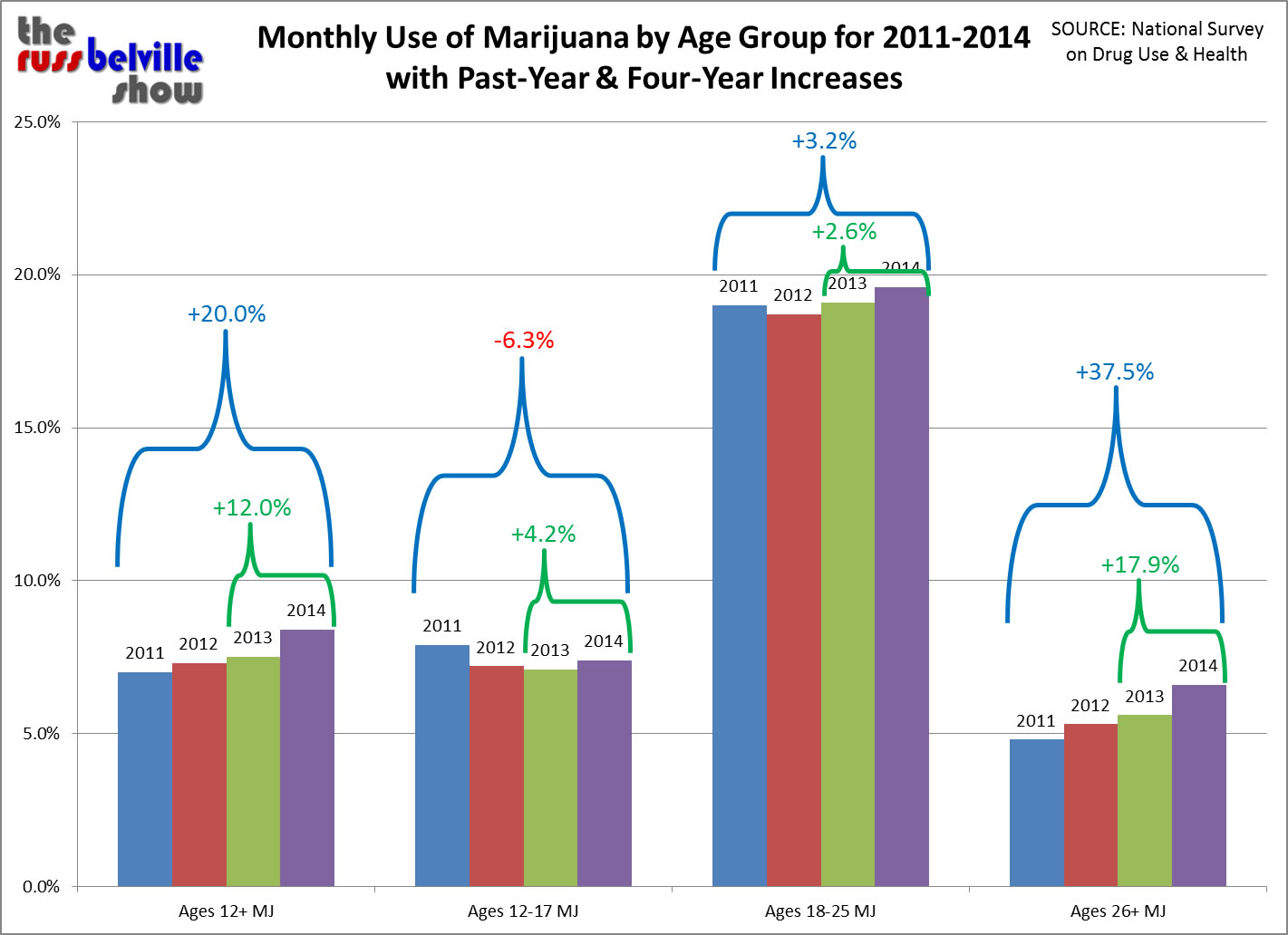 Looking back even further, the current release of the NSDUH lists monthly use data dating back to 2002. Back then, there were just eight medical marijuana states and legalization was about to lose elections in Nevada (2002), Alaska (2004), Nevada (2006), Colorado (2006), and California (2010). Fewer than one-third of the American public supported marijuana legalization. Prohibitionists then claimed throughout the decade that the spread of medical marijuana and the filing of legalization initiatives were sending the wrong message to the youth and would certainly lead to more teen use. 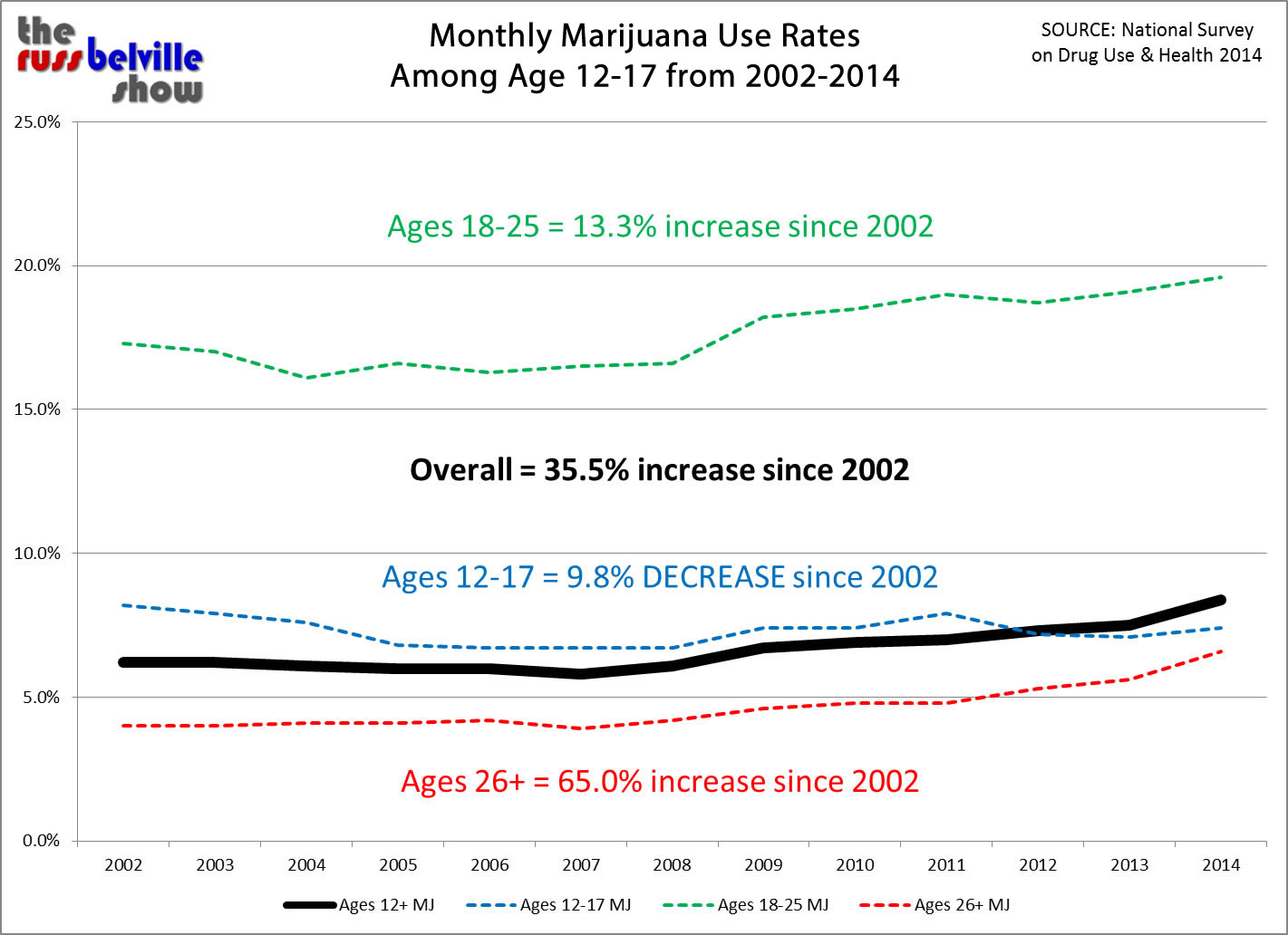 So, over the past dozen years, if there is any message the kids have received about marijuana, it is that they should wait until they are adults to use it.