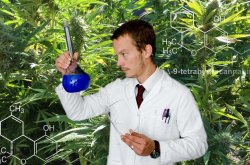 What Is Synthetic Marijuana?

Synthetic marijuana has carried various warnings from health officials since it began to surface as a cheap alternative to organic marijuana.  This substance however is little more than a cheap chemical spray that has an unknown strength.  It can bring about some negative and sever side effects and in general should be avoided.

To date, there are more than 400 different strains of synthetic marijuana available on the market.  They originated in the Middle East and mainly China.  The marijuana is sold in powder form and is shipped in small amounts but don’t let their small size fool you.  These are highly strong doses.

Once the distributor receives the powdered form of synthetic marijuana, they then make a liquid using acetone so that it can be sprayed onto plant matter.  The acetone evaporates away quite quickly and what is left is the dried on chemical.  These chemicals may be nothing more than fertilizer and they are not tested on humans or even animals.  There is no way of knowing that this synthetically made cannabis is going to even have any affect and in some cases, it could have a very negative effect.  To date, no lab has had the authority to test these strains of synthetic marijuana on animals.

Why Is Synthetic Marijuana Said To Be Too Dangerous?

Synthetic marijuana is not something that is hygienically produced either.  You can be sure that there is every likelihood that any synthetic marijuana that you buy has probably been mixed with rakes that are usually used for cleaning out animals, mixed in troughs and even cement mixers.  By simply packaging the synthetic cannabis in pre-printed packaging at low cost, it’s possible for distributors to sell the substance to a wide audience.  Luckily, the plant that the solution is sprayed onto is inert so it wont create a chemical reaction with the chemicals in the spray.  Having said that, these are some chemicals that you really won’t want in your body.

Whilst some of the synthetic marijuana packages claim to have been made with all kinds of mystical sounding plants, the truth is that even after extensive testing of the plants in the packaging, very few of them actually contained any of the ingredients that their labels claimed that they had.

As for the strength of the synthetic cannabis, this really varies from package to package.  Whilst some can seem to have hardly any affect at all on the user, others can be incredibly strong, suggesting that there is absolutely no care or quality control put into these products.  When something is sold with no regard to the customer in an effort to simply make greater profits, the end result could be very dangerous.

William Levy, an author for Pot Valet spent time working in the medical marijuana industry. He loves to write various topics about the benefits of medical marijuana, cannabis-related products and other stuff.