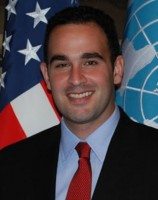 I explained to everyone on Wednesday how the New Project SAM Oregon Affiliate Can’t Explain Teen Marijuana Use Declines. That’s because the latest data from 2014 in the National Survey on Drug Use & Health are out and despite the prohibitionists’ fevered predictions, teens haven’t rushed to become joint-puffing youth marijuana addicts.

So I was really surprised to see how badly the national Project SAM office botched their press release yesterday, trying to conjure some sort of scary stat to frighten parents, but actually making the case for legalization. It’s subtle and requires looking things up, but that’s why I’m here. 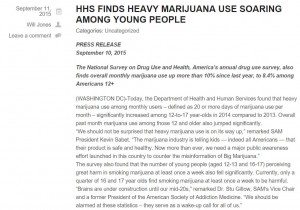 HHS FINDS HEAVY MARIJUANA USE SOARING AMONG YOUNG PEOPLE screams the all-caps headline of Project SAM’s press release authored by Will Jones. It explains (emphasis mine):

“We should not be surprised that heavy marijuana use is on its way up,” remarked SAM President Kevin Sabet. “The marijuana industry is telling kids — indeed all Americans — that their product is safe and healthy. Now more than ever, we need a major public awareness effort launched in this country to counter the misinformation of Big Marijuana.”

Here’s the problem: the headline is precisely the opposite of what happened.

That’s right, among the minors aged 12-17, the “heavy marijuana use among monthly users – defined as 20 or more days of marijuana use per month” actually declined from 25.6 percent to 21.8 percent, a relative decrease of 14.8 percent. Even looking among the annual teen users, their use of pot 1/3rd of the days or more (100+ days a year), there were declines.

Then the release tries to pivot that scary “heavy youth use increase” lie into the more general stat that “Overall past month marijuana use among those 12 and older also jumped significantly.” The problem there is that the increase from ages 12 and up is primarily due to the increase in adult marijuana use, according to the study’s authors:

Then the release closes with the statistic about declines in youth perception of risk in smoking marijuana once a week. So, inadvertently, Project SAM just told us that in the year since full retail legalization has transpired in Colorado and Washington:

When opponents of marijuana legalization like Project SAM are making the case for us, you know they’re flustered.