If Chris Christie Really Cared About Addiction, He Would Support Legalization 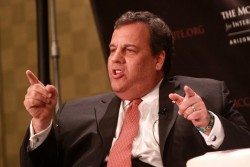 Of all the Republican presidential candidates, New Jersey Governor Chris Christie seems to be the most concerned about drugs and addiction. With drug policy now a focus of national attention, voicing his positions on these issues could be a good way for him to stand out from a crowded field of GOP candidates – especially if he were to go off-script and “tell it like it is.”

Unlike many of his rivals, Gov. Christie seems to get some things right when it comes to drug policy. The governor made waves last year when he brought attention to the harms of opioid use, like drug dependence and overdose. But rather than resorting to hollow anti-drug rhetoric, Chris Christie surprised us all by calling for a new approach on drug policy, describing the War on Drugs as a “well-intentioned failure.”

Speaking in New Hampshire in August, Chris Christie called for compassion towards drug users, bringing up a friend of his who had died of a heroin overdose. “It can happen to anyone,” he said, “And so we need to start treating people in this country, not jailing them.” Christie even called out the hypocrisy of anti-abortion advocates who support the War on Drugs: “The 16-year-old teenage girl on the floor of the county lockup, addicted to heroin, I’m pro-life for her too.”

These remarks have earned Chris Christie praise for his forward-thinking take on drug policy, and for many advocates of reform, they hinted at the possibility that the anti-drug fervor of the Republican Party could be on its way out. Sadly, Chris Christie’s apparent compassion is still nowhere to be found when it comes to marijuana users.

Over the course of his candidacy, Christie has repeatedly attacked marijuana users and promised strict enforcement of federal drug laws should he be elected president. He’s called marijuana users “diseased,” threatening to cure them with law enforcement, and even dismissed medical marijuana as “a front for legalization,” which he vocally opposes. Time and time again, Gov. Christie has called for the federal government to impose prohibition and crack down on states with reformed marijuana laws.

This president doesn’t enforce the marijuana laws in this country because he doesn’t agree with them, and he allows states to go ahead and do whatever they want on a substance that’s illegal. He allows lawlessness throughout this country.

Gov. Christie’s stance on marijuana policy is completely at odds with his position on solving the problems of opioid use. In fact, not only do his anti-marijuana views directly contradict his more compassionate sentiment towards opioid users, but research suggests that his proposed marijuana policy would likely increase the harms of drug use across the country.

In a study published last year, researchers found that states where marijuana is legally available saw significantly lower rates of drug-related harm. According to the Washington Post, “the presence of marijuana dispensaries was associated with a 15 to 35 percent decrease in substance abuse admissions. Opiate overdose deaths decreased by a similar amount.” The researchers conclude that “providing broader access to medical marijuana may have the potential benefit of reducing abuse of highly addictive painkillers.”

In other words, Gov. Christie’s anti-marijuana agenda would not help reduce drug-related harm – it would actually prevent lives from being saved.