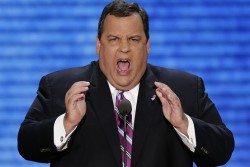 New Jersey’s lame duck governor and likely long-shot Republican Party presidential candidate just can’t help himself. The Reefer Madness radical Chris Christie doubles down on big government marijuana mayhem by declaring that he would use federal resources to trample the will of voters in Colorado and other states that have legalized marijuana. Christie declared his Big Brother intentions, if elected president, on CBS’ Face the Nation. It is odd that Christie would stick with such an unpopular position that goes against the conservative principles of small government and states’ rights. While GOP voters lag behind Democrats and independents in their support of cannabis legalization, a strong majority agree that the issue should be left to the states.

Chris Christie says he’d revive enforcement of federal marijuana law in states that have legalized recreational use of the drug if he were president.

The New Jersey governor says if that position causes him political trouble in battleground of Colorado, so be it. He says he won’t pander to voters or hide his positions for political expediency.

Federal and some state laws on marijuana are in conflict. But the federal government has adopted a hands-off approach to states with lenient marijuana laws. The Justice Department has told such states that it won’t challenge their laws so long as marijuana is tightly regulated. Colorado is one of them.

It is amazing that Governor Christie has the gall to state that he won’t pander to the will of voters, yet he has clearly pandered to Iowa farmers by vetoing a pig crate bill “which would prohibit pregnant pigs from being held in cages called gestation stalls that limit their ability to turn around, lie down, or extend their limbs”. I wonder if Governor Christie would support President Obama using federal resources to shut down New Jersey’s medical marijuana or internet gambling law. I’m guessing that he would be okay with the marijuana, but not the gambling, but it would be good to get him on record to further demonstrate his true hypocrisy. It seems to me that Christie’s big government plans won’t play well in GOP primaries, but the cannabis community must remain vigilant and ensure that the next president has a sensible stance on cannabis, unlike the radical madness spouted by Mr. Christie.