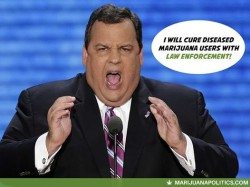 Chris Christie is making a habit of attacking states’ decisions to legalize marijuana, which he threatened to revoke this week should he become president. With the Republican debates only a week away, the New Jersey Governor is trying to stand out from other presidential candidates, and he has little time to make it happen — time he has chosen to spend lashing out at marijuana users:

In town hall meetings in New Hampshire and an appearance on Fox News this week, Christie said that if elected, he intends to overturn state marijuana legalization laws, which have been passed in Oregon, Washington, Colorado and Alaska.

“If you’re getting high in Colorado today, enjoy it until Jan. 17 of 2017,” Christie told an audience in Newport, N.H., on Tuesday, “because I will enforce the federal laws against marijuana as president of the United States.”

Gov. Christie has been making waves recently by trying to distinguish himself as an outspoken opponent of marijuana reform. Last week, Chris Christie suggested marijuana use was a disease, which he volunteered to cure with “armed federal agents,” preventing states from enforcing their own marijuana laws. Christie then doubled-down this week, declaring that “Marijuana is against the law in the states and it should be enforced in all 50 states. That’s the law and the Christie administration will support it.”

Most Americans disagree with Christie’s position on this issue, so this move seems risky at best. According to a nationwide poll, “54% of self-identified Republicans oppose the federal enforcement in states like Colorado.” Additionally, 63 percent of young Republicans want to see an end to marijuana prohibition altogether. As popular support for legalization continues to grow, Christie’s views on marijuana policy seem stuck in the times of Reefer Madness.

In a sense, Chris Christie’s crusade against marijuana has been successful, as it sets him apart from his Republican rivals, many of which are inclined to support states’ right to regulate marijuana free of federal interference. Other Republican contenders have expressed no desire to meddle with state marijuana laws. The libertarian-leaning Rand Paul openly supports the cause of marijuana reform, and candidates like Ted Cruz and Jeb Bush have argued that while they do not support legalization, “states should have the right to legalize cannabis.”

While Christie definitely stands out on this issue, it’s still unclear whether or not this will actually increase his chances in the GOP primary. Today’s Republicans are notoriously in favor of states’ rights, so Christie’s ambitions to crack down on legal marijuana put him at odds with a core component of his party’s rhetoric. In New Hampshire, the first state to vote in primary elections, most adults support legalization. Chris Christie has also shared his anti-marijuana message in Colorado, a key swing state, where he moralized voters for legalizing marijuana in 2012 (a decision they don’t regret).

If elected, Christie would work to nullify the decision of voters in states like Colorado, forcing marijuana back into the black market. His crusade against marijuana is not only unpopular, as legalization has been a resounding success for these states, but also in direct opposition to Republicans’ preference for states’ rights. According to Bloomberg, Christie’s poll numbers seem on track to allow him to participate in the first televised debate, so unless this strategy backfires, there are high chances that we’ll get another glimpse of Republicans’ views on the issue.