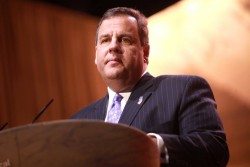 After spending two weeks threatening “diseased” marijuana users with a federal law enforcement crack-down, even in states that have legalized cannabis, a flip-flopping Chris Christie tones down his anti-drug message ahead of  TV debate in Ohio, declaring the War on Drugs to be a “well-intentioned failure.” This change in rhetoric has surprised many drug reform advocates and causes us to wonder how Christie will respond to questions regarding federal marijuana policy and the larger Drug War in the future.

Speaking on Monday at the Voters First Forum in New Hampshire, Gov. Christie shared his thoughts on American drug policies, this time supporting reform rather than his usual tough-on-crime message. Suggesting he would prioritize treatment over incarceration for people caught using illegal drugs, Christie went on to say “that his compassionate policies as governor proved successful” in New Jersey, which currently has a limited medical marijuana program.

These statements come as a contradiction to Christie’s previous remarks on the issue, as he has spent the past few weeks speaking out against voters’ decision to legalize marijuana in their states. Last month, the Republican candidate called marijuana users “diseased” and pledged to “have all of those diseased people in places like Colorado treated by armed federal agents” should he become president. He doubled-down a week later, threatening states with legalized marijuana to have their laws nullified through federal law enforcement.

In fact, Christie has a long history of opposing reforms that would curtail the disastrous effects of the War on Drugs:

Christie, who is one of more than a dozen Republicans vying for the party’s presidential nomination, has made no secret of his opposition to cannabis. Although he said this week that he has “no problem” with medical marijuana when prescribed by a doctor, he has opposed even his own state’s limited medical marijuana program and has called similar laws in 22 other states a “front” for full recreational legalization. He has characterized taxes generated from the sale of marijuana as “blood money.” He threatened to veto a decriminalization measure in his home state. And earlier this year, in no uncertain terms, he said that if elected president, he would “crack down and not permit” recreational cannabis in states that have legalized it.

Chris Christie’s change of heart on the issue is certainly welcome, but his record as governor casts doubts on his willingness to pursue meaningful reform as president.

While he congratulated himself on Monday for implementing “compassionate policies” in his state, Christie was strongly opposed to medical marijuana, “only [allowing] tightly restricted use of medical marijuana in New Jersey after a very public lobbying campaign that pitted him against the father of a little girl.” According to Reason, “As governor, he has made it all but impossible for sick Garden State residents to obtain marijuana, even though it was legalized for medical use before he took office.” Additionally, Christie used his power as governor to veto Good Samaritan legislation passed by lawmakers to reduce drug-related harm and overdose deaths in the state.

Christie’s departure from his anti-drug message is a no-brainer from an electoral perspective. According to nationwide polls, most Americans not only support allowing states to implement their own marijuana laws free of federal interference, but also legalizing marijuana outright. Additionally, even larger majorities agree that medical marijuana should be legal and that the War on Drugs is a failure. As these numbers suggest, Christie’s decision to tone down the Reefer Madness makes his platform less prone to controversy.

Softening his message on drug policy might help Christie in the first Republican debate happening later this week in New Hampshire. As Fox News announced Tuesday, Christie has made the cut to be included on the long-awaited televised event, which will include nine other presidential hopefuls. Marijuana policy is likely to be a subject of discussion, as there is strong support for legalization in New Hampshire, and several of Christie’s GOP rivals disagree with him on the issue. Should that be the case, Christie may get the opportunity to clarify his drug policy agenda on live television later this week.