Ending the Machinery of Death, Another Needed Criminal Justice Reform 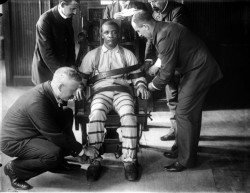 “I no longer shall tinker with the machinery of death,” Supreme Court Justice Harry A. Blackmun wrote in a 1994 dissent where he declared, “the death penalty experiment has failed.” More than 150 death row inmates have been exonerated by evidence of innocence since 1973. A recent study has examined exonerations and concluded that at least 4% of those sentenced to death are indeed innocent. No wonder that support for the death penalty has decreased among all political affiliations with 56% of Democrats now opposing the “machinery of death.”

I was so touched by Ricky Jackson who served 39 years for a murder that he didn’t commit as he asked Hillary Clinton about her position on the death penalty at the Democratic town hall in Florida last Sunday. Jackson’s story took my back to my college days in Columbia, Missouri. Inspired by the work of the Innocence Project, my wife and I joined other activists in publicizes the plight of Joseph Amrine, who was  eventually exonerated and released off of death row.

I was proud to have the University of Missouri’s ACLU and Christian Legal Society join forces on a clemency petition for Joe and to sit next to Joe’s attorney as his case was argued before the Missouri Supreme Court. The State of Missouri argued that Mr. Amrine should be executed even though no evidence remained to tie him to the murder after three witnesses recanted, admitting they had lied on the stand. Three Missouri Supreme Court judges still wanted to allow the state to execute Joe, but fortunately four agreed that a new trial was warranted. One of the highlights of my life remains the day that Sarah served Joe his first meal as a free man at Shakespeare’s Pizza in Columbia, Missouri.

Criminal justice issues have clearly been a big issue in the race for president, with a lot of time spent on the need to end our era mass incarceration. Capital punishment is another area of our criminal justice system that needs reform.

One Democratic candidate, Bernie Sanders, opposes the death penalty, while Hillary Clinton wants to keep the death penalty “in reserve.” While I don’t shed a tear for mass murderers, we can ensure that they serve life in prison without the possibility of parole, we don’t gain anything as a nation by executing them. By executing people, even those guilty of horrific terrorist attacks, our nation could actually lose out on the ability to gather more evidence that can be helpful. Not to mention the horrific consequence of executing innocent people.

The exonerated Ricky Jackson, who barely escaped the machinery of death, penned an oped for CNN stating, “Given this evidence, it is time that no candidate — Democrat or Republican — should be taken seriously if he or she supports capital punishment.”

At a time in our history when the streets of the Nation’s cities inspire fear and despair, rather than pride and hope, it is difficult to maintain objectivity and concern for our fellow citizens. But, the measure of a country’s greatness is its ability to retain compassion in time of crisis. No nation in the recorded history of man has a greater tradition of revering justice and fair treatment for all its citizens in times of turmoil, confusion, and tension than ours. This is a country which stands tallest in troubled times, a country that clings to fundamental principles, cherishes its constitutional heritage, and rejects simple solutions that compromise the values that lie at the roots of our democratic system.

Our criminal justice system is just too flawed, especially if you are poor, let alone a poor person of color, to give the state power over life and death. Democratic voters have an opportunity to elect a president who unequivocally opposes the death penalty or one that will continue to “tinker with the machinery of death.” I urge you to choose Bernie Sanders, don’t “tinker with the machinery of death.” Let’s stop the machine instead.