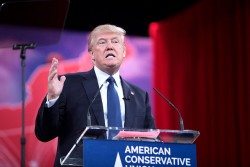 The 2016 presidential race is heating up with progressive Bernie Sanders, the favored candidate of many cannabis law reform advocates, gaining ground on the Hillary Clinton Machine on the Democratic side as Sanders’ progressive positions become known to likely Democratic primary voters and Clinton mired in unlikeability problems and scandal (potentially even a criminal investigation). On the Republican side, candidates are having a hard time getting noticed as Donald Trump sucks up all of the oxygen. Cannabis law reformers know that Chris Christie certainly isn’t an acceptable candidate and those that are inclined to vote in the Republican primary are flocking to Rand Paul.

As Donald Trump surges in the polls, the cannabis community wonders, “Donald Trump on marijuana: Fired?” Probably surprising to many, Trump actually called for the repeal of drug prohibition 25 years ago. Back in 1990, Trump told more than 700 people at The Miami Herald’s Company of the Year luncheon that the United States was was losing the Drug War “badly” and that,”You have to legalize drugs to win that war. You have to take away the profit from these drug czars.”

I don’t often (ever?) state this, but Donald Trump was right; we do need to end the Drug War and take profits away from criminal organizations and cartels. We have already seen drug cartels get pushed out of the marijuana industry because of just a few states ended cannabis prohibition. However, Trump seems to have flip-flopped on marijuana legalization, so the supposed straight talker should be asked why he has evolved on the issue. At the Conservative Political Action Conference, Trump stated that he “felt strongly” opposed to marijuana legalization, but that he supported medical marijuana “100%”. When pressed by Sean Hannity on the states’ rights issue of marijuana legalization, he stated, “If they vote for it, they vote for it.” While Trump went on to state incorrectly that Colorado had “a lot of problems” and he seemed ignorant of the benefits the state is experiencing, including millions of dollars for schools, his supposed states’ rights position gives him a better position than most GOP candidates and really in line with Hillary Clinton’s positions thus far.

While The Donald has made numerous statements that give many voters pause, his stance on marijuana and the Drug War is actually pretty decent compared to the rest of the GOP. While not as sensible as Rand Paul (who I would urge Republican cannabis law reformers to support), Trump at least states that he is a supporter of medical marijuana, so it seems that he wouldn’t use federal agents to crack down on grandmothers with glaucoma, but his states’ rights to regulated marijuana regulations position needs to be clarified before anyone from the Republican Marijuana Majority jumps from Paul to Trump.

As a businessman, Trump understands supply and demand and the demand for drugs in this country is too great; drug cartels are going to meet the supply. Prohibition isn’t the answer, regulation, taxation and education is a much better policy. Trump wisely (did I really just type that?) stated at the luncheon that tax revenue should be utilized to educate the public about the consequences of drug use. Since the facts back demonstrate that states benefit from cannabis regulation, including fewer opiate overdoses, generating millions of dollars in new revenue from cannabis sales, taking money out of the criminal market and putting that money into schools and drug education has been a success, why has Trump flip-flopped on the issue of legalization? While the Donald needs to explain his flip-flopping evolution on marijuana legalization, at least he didn’t call cannabis consumers “diseased” and pledge to use armed federal agents to trample the will of voters, but jumping over the Chris Christie cannabis bar is a pretty low standard.