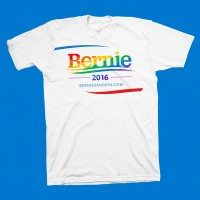 The 2016 presidential election is a pivotal event for the future of the cannabis community and greater Drug War reforms. Just as it was critical to have the Obama Administration allow the implementation of legalization in Washington, Colorado, Oregon and Alaska, the next president will have a tremendous influence upon the next wave of states voting to regulate marijuana.  As civil libertarians and those interested in a new approach toward marijuana and the War on Drugs, start to consider presidential candidates, Bernie Sanders certainly looks like the candidate to consider on the Democratic side and likely the best candidate overall.

Senator Sanders has had a long political career that includes executive experience as a mayor and then many years in Congress, both as a representative and a senator. Sanders was expressing progressive views on gay rights and the Drug War forty years ago, clearly ahead of his time. At first, no political pundit would give Sanders any hope of defeating the Hillary Clinton political machine, but now, the large crowds he attracts, his fundraising and rising polling numbers have shown that he could give Clinton a run for her money. In Portland, Maine, yesterday, a town hall meeting turned into a big rally that had to be delayed so more people could be let in. It is estimated that up to 9,000 people turned out to listen to the Vermont Senator call for a political revolution. Bangor Daily News reports:

Sanders said his goal was to create a movement in the tradition of the abolitionists, suffragettes, civil rights activists and union organizers. “If we want real change, it’s not just electing someone — hopefully me,” he said to laughs. “No one in the White House will have the power to take on Wall Street alone, corporate America alone, the billionaire classes alone. The only way that change takes place is when we develop that strong grass-roots movement, make that political revolution, stand together, and then we bring about change.”

Sanders touted his progressive bona fides, promoting an increased minimum wage, protections for access to abortion and an end to the war on drugs. He railed against trade agreements that saw American jobs moved overseas, and promised to fight for free public college education and universal health care, paid sick time and paid maternity leave. He swore to unequivocally pursue energy policy to fight climate change.

But it was income inequality that Sanders called “the great moral issue of our time.”

Bernie Sanders’ messaging should resonate with anyone that wants to reform our drug laws. The Drug War has been waged upon people of color and people battling poverty. Income inequality rears its head in tragic ways when someone is arrested for drugs. If you are poor and can’t afford an attorney, the consequences for you and your family can be devastating, but if you are rich and can hire the best attorneys in town, odds are you won’t see the inside of a prison cell. When is the last time you have heard of a wealthy person serving prison time for drugs?

The narrative surrounding Bernie Sanders is changing rapidly and I urge all of his supporters to publicly tout his candidacy. It is possible that Sanders could win the Iowa Caucus, where motivation and passion of supporters is key and the Clinton team is already concerned (rightfully so, as she finished third behind Barack Obama and John Edwards in 2008). Sanders could definitely win the New Hampshire Primary, especially if he does well in Iowa, as the Granite State borders Vermont, giving Sanders better name recognition than in most of the country. If he can pull off two early upsets, then the narrative surrounding the Democratic Primary changes. Many people didn’t think that we would see an African-American president in our lifetime, let alone one with the middle name “Hussein”, so don’t let anyone say that Sanders is “too old”, “too liberal” or that he doesn’t “look presidential.” Political revolutions don’t come easy, but Bernie Sanders is hoping to lead one. The question is, are we willing to follow him?