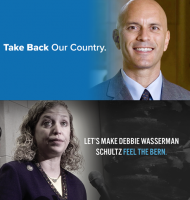 Bernie Sanders has endorsed Tim Canova over Debbie Wasserman Schultz for US Representative in the August 30 Florida Democratic primary vote.

The primary election offers the chance to replace anti-cannabis prohibitionist Schultz with drug law reformer Tim Canova.  Debbie, of course, is also the Chair of the Democratic National Committee, a role from which Bernie vowed to fire her. This blog has offered several examples of her incompetence and mismanagement in both her powerful roles.

As a Congresswoman in the US House of Representatives Debbie’s record is dismal:

As Head of the Democratic National Committee, Schultz has demonstrated favoritism and incompetence:

Of course if she does lose her House seat there is the danger of her being awarded a big role in a Clinton administration, if Hillary wins the nomination and presidency. It is possible she may be more dangerous as a Clinton appointee than as a US Representative, but such speculation cannot over ride the need to defeat her in the primary, and to add Tim’s vibrant new voice to cannabis reform and to other progressive ideals in the US Congress.

This is the first time that DWS has had a primary challenger for her 12 year reign in Florida’s 23rd District. Check out Bernie Sander’s choice for Democrat in the contest, Tim Canova. Tim could use your contribution to help him have a chance against Debbie’s lucre from alcohol and pay day loan industries.