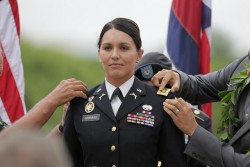 Congresswoman Tulsi Gabbard sent shockwaves through the political landscape by resigning as vice chair of the Democratic National Committee to endorse Vermont Senator Bernie Sanders for president. DNC officials must remain neutral, so Gabbard had to resign to make an endorsement. Supporters of Bernie Sanders have often complained that the DNC has been showing too much favoritism to front-runner Hillary Clinton, such as the limited number of presidential debates. Representative Gabbard and DNC Chair Debbie Wasserman Schultz’s disagreement over the number of debates spilled over into the public sphere.

As a veteran of the Iraq War, Rep. @TulsiGabbard understands the cost of war. I am honored to have her endorsement.https://t.co/0e1BQ48eyb

Representing Hawaii’s 2nd District, that contains Honolulu, Rep. Gabbard made history as the first Hindu member of Congress and the first member born in America Samoa. Also, at 31, she was the youngest woman in Congress at the time and just the second female combat veteran. She was an underdog in her primary race, but thanked a tremendous grassroots effort for her success when she spoke at the 2012 National Convention.

Gabbard has been recognized both as a rising star within the Democratic Party, but also as a wildcard willing to speak her mind and buck the party establishment. She has even been called the Democrat that Republican’s like because she has criticized President Obama for failing to refer to discuss Islamic extremism.

It does seem odd that a seemingly hawkish veteran Democratic would endorse Bernie Sanders, but Rep. Gabbard made Sanders’ better judgment in avoiding failed quagmires like the Iraq War, as the basis for her endorsement. I was even contacted on Facebook about the fact that Gabbard is not a progressive and considered “weakly liberal.” I decided to do some more research on this Democratic rising star, especially on her position on marijuana and civil liberties, and have come away pleased with her votes thus far. On civil liberties in general, Rep. Gabbard has received a 90% rating from the ACLU, not the 100% rating that all of my home-state Oregon Democrats have received, but not bad.

On marijuana policy, Gabbard has voted the right way in Congress. She voted in favor of the successful Rohrabacher-Farr Amendment that prohibits any federal funds from being utilized to arrest and prosecute people acting in compliance with their state medical marijuana laws. She also voted for the McClintock Amendment, which failed 206-222, that would have defunded the DEA from interfering with states that have legalized adult-use marijuana. Unfortunately, DNC chair Debbie Wasserman Schultz voted against both of these common sense provisions, putting herself out-of-step with the rest of her party.

Representative Gabbard, who knows combat first-hand, voted in favor of Earl Blumenauer’s Equal Access Amendment that would allow veterans to consult with their VA doctor about medical marijuana in states where medical use is legal. Unfortunately, the Equal Access Amendment failed 210-213, with only 8 Democrats voting against the measure and 5 not voting; only 4 of those 13 Democrats were needed to help our military veterans. One of the 5 Democrats that didn’t vote on the Equal Access Amendment was DNC chair Wasserman Schultz. It is a disgrace that veterans who have fought and sacrificed for our nation, aren’t able to utilize medical cannabis in any state, let alone in states that have voted to allow medicinal use.

Congresswoman Tulsi Gabbard is taking a very brave political stance by distancing herself from the DNC to support Bernie Sanders as this stance could bring repercussions from the political establishment. As a “rising star” in the Democratic Party, it would make a lot of political sense for Rep. Gabbard to keep her head down and not rock the boat, but she instead chose to speak her conscience.

Stopping the United States from waging more unnecessary wars abroad, and at home, is one of the reasons progressives and civil libertarians are supporting the anti-establishment candidacy of Bernie Sanders. If you support the positions of Rep. Gabbard, both in supporting Sen. Sanders, and also ending futile foreign wars and the War on Cannabis at home, please support Representative Gabbard.