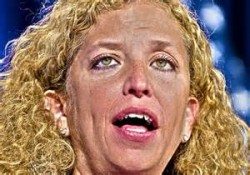 As chair of the Democratic National Committee, the Florida congresswoman has shown herself to be inept, biased, and unfair. She is especially ignorant regarding cannabis prohibition. Schultz has been a divisive disaster for Democrats and must be replaced to save the presidency in 2016.

You’re one of a dwindling number of progressive politicians who oppose legalization of even the medical use of marijuana. Where does that come from?

The Florida representatives first lied in responding “I don’t oppose the use of medical marijuana,” and then went on with very muddled reasoning about why she opposes cannabis.

Regarding her stance on medical marijuana, she is in fact a big part of the reason Floridians in need of cannabis do not have access. She famously opposed the state’s 2014 medical marijuana initiative, and it failed to achieve the required 60% majority. Her actions not only served to deny the benefits of medical cannabis to Florida citizens, but also to spur continued arrest and prosecution of Floridians whose medical choice is to ignore cruel and ignorant cannabis laws.

Politically, Shultz’s opposition to the medical marijuana initiative was costly. She alienated top Florida democratic fundraiser and former ally, John Morgan. He has now vowed to help oppose he candidacy for continued Florida office, including her primary should she run again in 2016. The bad news, if she gets booted from her congressional office, she would likely find employment in a Clinton administration.

In the NYT interview, Schultz continued:

I just don’t think we should legalize more mind-altering substances if we want to make it less likely that people travel down the path toward using drugs. We have had a resurgence of drug use instead of a decline. There is a huge heroin epidemic.

That’s right, she conflated legalization of marijuana with the pain-killing pharmaceutical induced heroin epidemic. In reality, medical marijuana may well offer a way to prevent and reduce addiction to opiates; states offering medical access to cannabis suffer from less addiction and fewer drug-related deaths. Opiates and alcohol can kill, and do so daily. Cannabis cannot kill, and never has.

Debbie Wasserman Schultz understands none of this.

Like Republican candidates Chris Christie, Carly Fiorina, and John Kasich, Debbie accuses cannabis of being a “gateway drug”. This prohibitionist talking point was discredited nearly 20 years ago in the major Institute of Health study on marijuana. As it turns out, alcohol is the true gateway drug.

Indeed, a troubling aspect of Schultz’s opposition to cannabis is her close relationship with the alcohol industry. Purveyors of the truly dangerous drugs alcohol and tobacco have always been in the forefront of  anti-cannabis propaganda. “Booze PACs” are major supporters of her campaign; they may well now warp her votes on marijuana.

NORML assigned her a -10, strong supporter of the war on drugs, right in there with the right wing of the Republican party. Why do some call her “progressive?”

The 2014 election was Debbie’s debacle.

In the last election, Democrats lost 9 senate seats, 13 house seats, several governor’s offices and got mauled in state and local elections across the country.

The DNC failed to get out democratic voters in an election with the lowest turnout since 1942.  The DNC chair totally failed to rally young voters, who did vote slightly democratic, but only 13% of them voted!

Schultz did win her own reelection in Florida. She was criticized for running away from her boss, President Barack Obama. Turnout in her district was tepid. Certainly, she should have been fired from the DNC chair after the 2014 electoral disaster.

Many believe as DNC chair she has acted to promote Clinton’s candidacy over Bernie Sanders.

The Vermont Senator Sanders offers far better positions on a range of criminal justice and drug law issue, especially marijuana reform. A Clinton nomination over Bernie Sanders would be a set back for cannabis legalization. Hillary could be expected to be even more tepid than Barack Obama has been on cannabis and drug law matters.

A special danger of a Clinton administration would be the likelihood that Debbie Wasserman Schultz would serve an important role, to the detriment of cannabis liberation. She could be expected to carry her right wing cannabis agenda into a  Clinton presidency.

Debbie Wasserman Schultz must not lead the Democratic Party during the 2016 election.

Calls for her resignation or firing are coming in from all directions. The best case for those of us working to end cannabis prohibition would be the firing and permanent exit from political power of Debbie Wasserman Schulz.