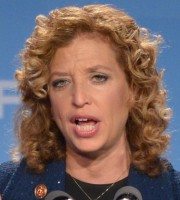 The Democratic National Committee chairperson Debbie Wasserman Schultz is responsible for getting out the Democratic vote; she is failing terribly.

Voter turnout may well determine if Donald Trump becomes our next president. Perhaps more important for cannabis reform than who will be next commander-in-chief is who becomes next Attorney General.

In light of his recent endorsement of Trump, the 2016 election could bring bellicose ex-prosecutor Chris Christie to the head of the Justice Department. An Attorney General Chris Christie (gag reflex) could, and likely would, smash the booming recreational cannabis industries in legalized state. Medical cannabis users across the country could lose access to their medicine and what little research is being done could be stopped. The anti-marijuana New Jersey governor spews cannabigotry and vowed, as presidential candidate, to eradicate recreational use in legalized states. As Attorney General he would have the power to do so. See, Chris Christie Calls Marijuana Users “Diseased,” Pledges to Cure Them With Law Enforcement.

Turnout determines much more than the presidential decision; recall the massive Democratic losses in 2014, when the Republicans took the Senate, added dozens of congressional seats, and won hundreds of state and local contests.

In 2014, younger voter participation plunged to 13% from 19% two years earlier, when voters 18-29 came out to vote for Barack Obama. These absent voters would have most likely to vote democratic. Their votes may have been able to stem the Republican tsunami.

DNC chairperson Debbie Wasserman Schultz had no clue how to get out the 2014 Democratic vote, and still does not, as she proves again with dismal Democrat turnout in the 2016 primaries.

In 2016, California will decide whether to pass the Adult Use Marijuana Act of 2016. Or not. The exact voters democrats did so poorly with in 2014 are those who could pass AUMA. If they vote.

Ironically, Debbie Schultz opposes marijuana, including medical marijuana in her home state of Florida. As a US Representative, she recently voted against allowing US veterans access to medical cannabis. A low democratic voter turnout would achieve her anti-legalization, anti-marijuana agenda.

Rising Democratic star Tulsi Gabbard locked horns many time with Debbie as a vice-chair of the Democratic National Committee. Representative (from Hawaii) Gabbard challenged Schultz’s handling of the primaries, including the debates, which pulled in far few viewers than did the GOP events. Finally, Gabbard resigned her DNC post to support Bernie Sanders.

The latest action of Congresswoman Schultz left those calling themselves progressives scratching their heads in disgust that she is the DNC chairperson. She has joined with Republicans trying to delay new rules for reigning in parasitic pay day loans, crippling recent action by the Consumer Financial Protection Bureau (CFPB) and Senator Elizabeth Warren.

Debbie Wasserman Shultz’s incompetence and divisiveness cost the Democrat’s turnout terribly in 2014; in 2016 she may well cost them them presidency, the Justice Department and, for reformers, key legalization contests.