Democrats Could Dump Debbie This Primary! 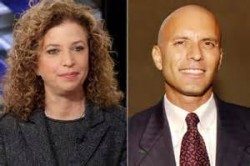 Schultz’s failings as a Democratic congressperson are huge. Supposedly a progressive, she instead opposes medical marijuana and joins corporate Republicans to support the predatory payday loan industry. Her neo-con, prohibitionist, and money grubbing politics belie her “progressive” posturing. She does not deserve another term as a Democrat in the House of Representatives (or as DNC chair.)

The 23rd District Florida Congresswoman has some huge reelection advantages, but she is also acutely distrusted and disliked by an increasing number in her party. For the first time, she faces a primary opponent, a very strong candidate. Just as Bernie Sanders has triumphed in the west over Hillary Clinton, true progressive Tim Canova (pictured above with DWS)  could crush Debbie Wasserman Schultz, especially if Sanders takes the presidential nomination.

Unfortunately, DWS’s campaign has many advantages:

Despite these election strengths, she has major vulnerabilities caused by her own arrogance and incompetence. Many people, especially former allies, deeply dislike her.  For example, Glenn Greenwald in The Intercept:

In general, Wasserman Schultz is the living, breathing embodiment of everything rotted and corrupt about the Democratic Party.

As for Rep. Debbie Wasserman Schultz, she embodies the tactics that have eroded the ability of Democrats to once again be the party of the working class. As Democratic National Committee chair she has opened the floodgates for Big Money, brought lobbyists into the inner circle and oiled all the moving parts of the revolving door that twirls between government service and cushy jobs in the world of corporate influence.

Shultz has never faced an opponent in any of her six previous primaries. Her worthy primary challenger, Tim Canova, is just the type of candidate Democrats need and the type of congressman America needs.

A law professor, he has worked with former New Mexico Governor, and current Libertarian presidential candidate, Gary Johnson, on prison reform. On incarceration, indeed on many issues, he echoes the wisdom of Bernie Sanders. Regarding Debbie’s recent outrageous alliance with Republicans to nullify recent regulations, achieved by Senator Elizabeth Warren to reign in payday loan sharks, please read Canova’s criticism in his own words: Debbie Wasserman Schultz Shouldn’t Be Welcoming Loan Sharks Into the Democratic Party.

Criticism of the failed war on drugs is a key Tim Canova position!

As congressman he would bring the good fight to the Hill, a new reform ally joining Rep. Earl Blumenauer, Rep. Steve Cohn, Rep. Dana Rohrabacher and other patriots in congress fighting the tyrannical drug war. He states:

Public opinion surveys show that people across the country, and particularly in South Florida, want to end this misguided drug war.  Unfortunately, powerful industries continue to lobby for the drug war – including the same pharmaceutical, alcohol, and private prison companies from which my opponent readily takes large amounts of money.  It is time to take corporate money out of politics, end the drug war, and provide legal and healthy alternatives for everyone.  People should have the freedom to decide with their doctors whether to use medical marijuana, and to decide for themselves whether to use marijuana recreationally.  We don’t need more prisons.  We need more jobs and more educational opportunities as alternatives to drug dealing and chronic drug use.

For  drug war reformers, and American patriots in general, the defeat of Debbie Wasserman Schultz would be at least a double win; one less prohibitionist drug warrior, one more  freedom fighter passionately opposed to the war on drugs.

Quite probably, the nomination from the Democratic National Convention will determine the outcome of the Florida primary a month later. If Hillary Clinton is the nominee, she will doubtless lead her ally Debbie to victory. But if Bernie Sanders wins the nomination, Debbie will have a difficult time holding either job, DNC chair or Florida congresswoman. She deserves neither position.