Twelve Senators Who Do Not Support Our Troops 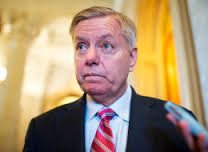 South Carolina chicken hawk Lindsey Graham, left, and eleven other senators just voted against the rights of traumatized American veterans to hear of perhaps the best treatment option for PTSD. They voted NO on the Veterans Equal Access Amendment.

But the good news is, even with the disloyal-to-the-troops votes of these treacherous twelve, for the first time a Senate committee (Appropriations) voted in favor of marijuana law reform! As this motion moves through congress, medical care providers for veterans may soon have their gag order removed and may well gain the freedom of speech to tell their patients about the therapeutic effects cannabis can provide for PTSD and other wartime injuries.

The vote actually reverses asinine congressional legislation passed in 2009 (while Americans were being wounded in two wars)  forbidding veterans, even those living in states that had legalized medical cannabis, from asking about or hearing about this effective treatment for PTSD, pain, and other wounds of war.  Even now, incredibly, VA physicians themselves are denied the right to even discuss with their wounded warrior patients medical marijuana as a treatment option. How ironic that those supposedly fighting for American freedom are denied the basic freedom of choice regarding their own health.

Medical freedom is denied to both the veterans and their physicians by vindictive bureaucrats. This tyrannical policy:

To the shame of the GOP, the twelve senators that voted to continue denying wounded veterans possible life-saving information about their PTSD are all Republicans. They are:

Four Republicans refuted their party and instead supported American veterans in passing this historic legislation. They are:

All the committee’s Democrats voted for the bill extending to veterans the same medical rights of other American citizens in states with cannabis medical liberty!

The final result was 18 YES over 12 NO! Victory for American veterans, medical cannabis, and freedom of speech.