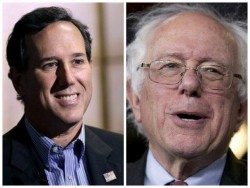 Many cannabis law reform advocates and Drug War reformers have certainly rallied behind Vermont Senator Bernie Sanders. The insurgent candidate has stated that he will consider legalizing marijuana; that states should be able to legalize without restrictions; he has called the Drug War a failure; and he has introduced a bill to abolish private prisons.

Apparently, former Pennsylvania Senator Rick Santorum, a hard-right Christian fundamentalist who finished 2nd in the 2008 GOP primary, believes that Sanders statements and positions on marijuana and drug policy amount to legalizing all drugs. He also seems to believe that legalizing all drugs is very popular, feeding the surge in the polls for the anti-establishment candidate and fueling his large campaign rallies. You can see the video of Santorum’s statement here.

Now in Santorum’s defense, he is responding to a question from an audience member, so he’s speaking rather off-the-cuff and he also adds that Sanders says that he’s gonna “do all sorts of great stuff” (but what presidential candidate doesn’t promise great things). Additionally, Sanders did oppose the War on Drugs four decades ago and he has seen his poll numbers climb at the same time that he has continued to speak out for sensible Drug War reforms.

Despite finishing only behind Mitt Romney for the 2012 Republican presidential nomination, Santorum has had a difficult time finding any traction at all in 2016 as he is polling around 1%; he is probably appalled that a newcomer like Donald Trump has dominated coverage. In contrast to Sanders’ huge crowds, Santorum famously had 1 person show up for one of his Iowa campaign stops. Santorum even went on the Bill Maher show to somehow increase his profile and then Maher had to correct the record two weeks after the conservative candidate provided some incorrect information regarding climate change during his live interview.

Many of us wish that Senator Sanders would call for an end to the Drug War, as it is a failed and harmful policy that has plagued our nation for far too long, but he hasn’t gone that far as a presidential candidate. There are many reasons why voters across the country, including a majority of Democratic primary voters in the early states of Iowa and New Hampshire, have decided that they support Bernie Sanders over the establishment candidate Hillary Clinton. We may #FeelTheBern and many of us say #NoMoreDrugWar, but Senator Sanders hasn’t joined us reformers in calling for a complete end to prohibition. We’ll probably have to wait for his 2nd term for that.