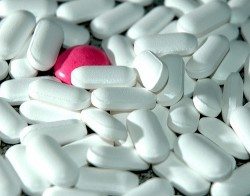 If you’re like a plurality of Americans, you spent Sunday night watching the Super Bowl along with its celebrated commercials that technically take up more time than actual game-play. Those ads are incredibly lucrative; CBS–which is airing the game this year–is reportedly charging $5 million for 30 seconds of airtime. And what mega-rich multinational corporation wouldn’t jump at the opportunity? No other traditional television platform allows a company the opportunity to present its product to more than a third of Americans in one fell swoop.

Enter Big Pharma with its latest display of benevolence: A cure for “Opioid-Induced Constipation,” or “OIC” as the advertisement so expertly vanilla-labels the malady.

Yes, it’s a widely-known fact that heroin and its legal opioid prescription cousins can cause a pretty rough case of constipation. And, of course, big Pharma couldn’t be happier to provide you with a solution to the problem it’s created. In fact, it shelled out something like 5 mil to advertise said solution during the Big Game.

The ad (embedded below) looks like your typical big-budget pharmaceutical TV production, featuring a handsome lead, and with a pleasant male voice narrating, “If you need an opioid to manage your chronic pain, you may be so constipated it feels like everyone can go except you. You may have ‘Opioid-Induced Constipation,’ or ‘OIC.'” The nice man then encourages the afflicted viewer to “have a conversation with your doctor about OIC and ask about prescription treatment options.” Without, of course, explaining exactly which “prescription treatment options” it is referring to. The ad then gently fades to a black screen displaying “brought to you in partnership with” followed by the logos of several prominent pain advocacy organizations along with, at the very bottom, the true benefactors: AstraZeneca and Daiichi Sankyo.

AstraZeneca is a $6 billion multinational pharmaceutical firm that last year announced a partnership with Japan’s Daiichi Sankyo to “jointly commercialise” MOVANTIK, a drug the DEA had previously scheduled as a controlled substance because it is “structurally related” to an opiate painkiller. The press release touting the deal described AstraZeneca’s president as cooing, “We are delighted to collaborate with Daiichi Sankyo to expand our commercialisation efforts in the US in order to get this important medicine to the large number of patients suffering with opioid-induced constipation.”

Prescription opioids kill tens of thousands of Americans annually, and have left another two million in the throes of addiction. Big Pharma has made, literally, billions off of people’s pain, entrapping millions in a cycle of abuse and misery. Now they’re selling us the cure for what is probably the least bad side-effect of mass opioid consumption: Constipation.

Of course there’s another remedy for chronic pain that does not, to my knowledge, afflict its users with any side effect as awful as constant constipation. You might have guessed. It’s called cannabis and is not only shown to reduce pain, but also to reduce opioid-related harm and help users break their dependency on the harmful drug. Is it any wonder, then, that pharmaceutical companies are fighting tooth and nail against its legalization? A movement that would, of course, potentially kill AstraZeneca’s new big money-maker: A treatment for a side-effect caused by medication its partner is making a shit-ton of money off of.

But, wow! One hell of a halftime show, huh?