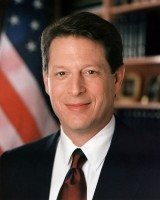 One of my stock lines on the speaking circuit is that if marijuana had been legal in 2000, Al Gore would have been our 43rd president.

If 9/11/2001 had blocked your mind from recalling the events of just ten months prior, let’s refresh the memory. Al Gore had won the popular vote in the 2000 election against George W. Bush; however, presidential elections aren’t decided by a democratic vote, but rather by the colonial-era vestige of an Electoral College, which gives disproportionate power to less-populated states and effectively makes presidential electtions into contests of just a few “swing” states rich with electoral votes.

In the 2000 election, the presidency all came down to the state of Florida, where George’s brother (and current 2016 presidential candidate) Jeb was the governor and the co-chair of the Bush campaign in Florida was Secretary of State. First the networks called Florida for Gore. Then it was too close to call. Then it was called for Bush. Then it was so close a mandatory re-count was triggered. Then we saw the “Brooks Brothers riot” of GOP operatives harassing recount officials and we learned more than we ever wanted to know about hanging and pregnant chads. In the end, the Supreme Court decided to stop any further recounting. Bush was declared the winner of Florida by 537 votes.

Much was made over Secretary of State Katherine Harris’s purge of the voter rolls prior to the 2000 Election, with many commentators pointing out the racially disproportionate nature of the purge (African-Americans, of course, are usually a reliable voting bloc for Democrats). But few aside from me noted that the system had already been rigged against Democrats through the racially disproportionate nature of the War on Drugs.

Now, consider that Florida has the lowest enumerated weight at which one will receive a felony charge for marijuana possession, just 21 grams, or about three-quarters of an ounce. (Arizona can charge a felony for any amount at prosecutor’s discretion, while Florida’s over-20-grams will always be a felony charge.) Data on Florida marijuana arrests are sketchy; for many years they did not contribute to the FBI’s Uniform Crime Report. But I did find almost 26,000 marijuana arrests in 1995 and almost 58,000 in 2010.

Not all those arrests are going to be felonies; 92% of the 2010 arrests were for possession. Those 8% that were for sales or cultivation were certainly felonies, though, and 8% of 26,000 comes up to over 2,000 people who can’t vote. The ACLU found in 2010 that blacks made up over 46% of all marijuana arrests.

Of the over 2,000 of the non-possession felonies from 1995, 46% of that is an estimate 955 black people who lost their right to vote for life for planting or selling pot. In the 2000 Election, 90% of African-Americans voted for Al Gore, so that represents 860 votes that would’ve gone to Al Gore.

There are plenty of problems with this theory. Who says all the convicted black felons would have even voted? Maybe white convicted felons would have out-voted them. But consider; that figure of 860 disenfrachised Al Gore votes is just the number for 1995 non-possession marijuana felony convictions. There would have also been some significant percentage of the 26,000 1995 marijuana arrests that were possession felonies for over 21 grams, which are also racially disproportionate and would’ve boosted the disenfranchised Al Gore votes total.

Then remember; these figures don’t reset, they accumulate. The 860 who lost their vote in 1995 are joined by another set who lost the right to vote in 1996, and in all the years leading up to the 2000 election. It would take much more time to research and quantify accurate estimations, but I feel it is reasonable to posit that if Florida had neighboring Georgia’s marijuana laws that don’t felonize possession until one full ounce or more, even the sliver of felons convicted for 21 to 28 grams leading up to the year 2000 would have been enough to give Al Gore a sizeable enough vote advantage that the recounts would never have happened. And, of course, if marijuana was legal and nobody was getting felonies for it, Al Gore would have won in a landslide (as pot smokers skew young, Democratic, and liberal). 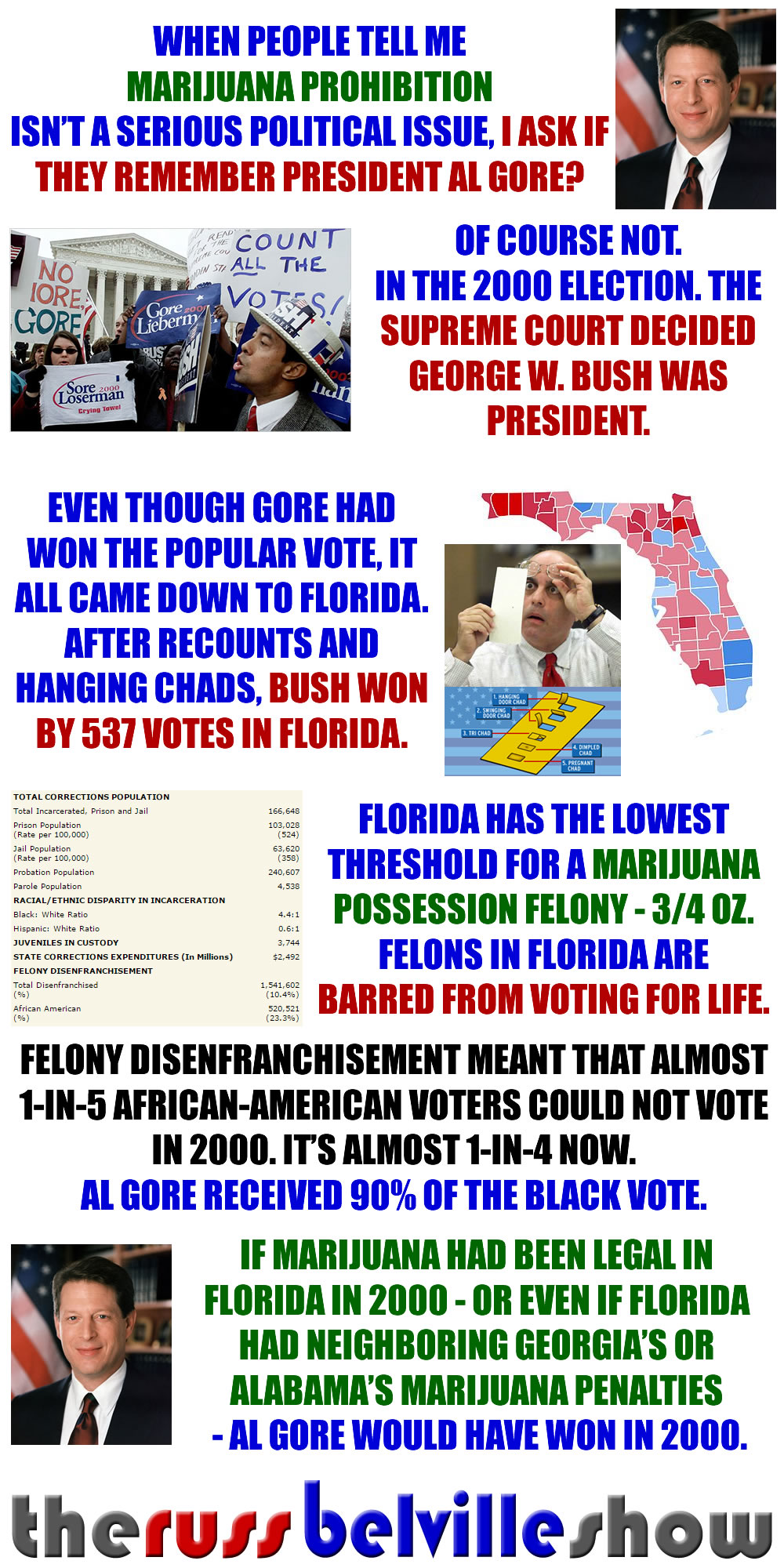